B.O.B is a troll ( giant ) street sam, with a big heath and a small brain. Well that is what B.O.B tries to present himself as. In reality B.O.B is just a drone to a much more smaller and way more frail rigger who just so happen to be tiger.

B.O.B is the drone, Bob is the pilot. Bob view himself more as the drone than to his usual furry body. As such bob is usually jack into the drone almost ever hour of the day ( Except when he has to rest ).

To become a real boy. Either by modding his drones to near perfection or by finding a way to shape change his body, that to of a troll.

Bob was taken away from his home when he was young and was sold to be trained into guard tiger. They soon realized that the tiger they bought was much weaker than the others but a lot more smarter. So the corp did the same thing they do whenever they found something special. They exploited it. They began putting more and more ware into the small beast even managing to teach it how to properly rig all while thinking the animal was too stupid and loyal to disobey their order.

One he was done massacring the entire facility with the new toy they just bought for him, bob took as much data they had in the facility and decided to do this thing called shadowrunning he heard so much about.

Dealer Connection - Bob has invested quite a large sum of money in B.O.B and as such knows a few ways on how to lower the price.

Tough As Nails (P) - Bob might has been weak when they first got him, but years of bearing biofeedback has give him some tolerance.

Restrictive Gear - B.O.B has always stayed by his side ever since they escape, so much so that Bob view B.O.B more of himself than his meat body.

Distinctive Style - B.O.B is a giant 3 meter high troll and Bob is a cyber tiger. There's nothing mundane about them.

Emotionally Attach - Bob see himself as B.O.B and as such would do whatever it takes to recover his body back and keep it well.

Faceless - Bob doesn't like to be seen. At all.

One Born Every Minute - It might have been all that discipline training he was taught when young, or it might be that he doesn't know much about the world. Whatever it is, Bob is quick to take things at face value.

Too Much Data - Bob usually only operate B.O.B and maybe his vehicle. He never got used to having more than 3 drones controlled at all times 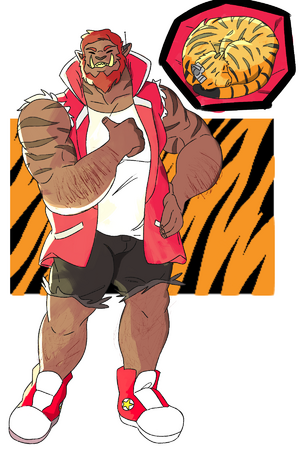