Bruiser or bruce for short was a Underground Wrestling United (U.W.U) champion by the alias of Smashquatch who was forced into retirement after accidental homicide and drug abuse. Now he is a shadowrunner priotised in unarmed combat.

To one day return back to his wrestling career.

To fight a good fight.

Unlike most sasquatch, Berry was Born in the urban sprawl of seattle. With both of his parents working in the entertaiment industry, it was no suprised that berry would go on to work for horizon.

His wrestling career started small, with him joining a few underground fights here and there. People soon realized that a boxing sasquatch with magic was highly marketable and not long after he was quickly pick up by horizon, to become a Intermeta Combat Federation ( I.C.F) Superstar. A "wrestling" organazation who priotised on the more entertaiment prospect than being the real deal.

From here he got it all, the fame the fortune and of course all the addoring fan. Yet Berry still felt discontent. He didn't just wanna act tough he wanted to be tough. When he has downtime from his pro wrestling career, he would sneak in and start fighting in the more underground area where the rules are looser and the action more illegal.

Time caught up with him eventually when he slip up and went into a I.C.F match still high with kami and cause the death of one of the other fighter. After the incident there was a huge investigation where they found out about his double life and not to mention on all the illegal drugs he had stowed away.

If this was any other fighter he would just get a slap on a wrist and a warning for these kinda things, especially with his fame. The only problem was that the fighter he killed was the famous fighter Johnson "The Boulder" Celena, and thus was a huge loss to Horizon.

Bruiser got his tittle revoke, his name blacklisted and his possession reposes, the only reason he wasn't behind bar was because he had enough money to pay for very good lawyers and very expensive bribes.

Now broke and alone, Berry turns to the shadow to find his next match.

Exceptional Attribute : You gotta be the very best if you want to become a pro athlete.

Fame ( National ) : Being a UWU superstar has its perk.

Dependent ( Demanding ) ( Drugs ) : One of the many reasons why Bruce was kick out of the UWU.

Bad Rep ( Horizon ) : A cancelled artist is a PR nightmare. Plus all the accidentally homicide and all. Look, lets just say Bruce won't be making any more guess stars from now on.

Corporate Pariah II ( Horizon ) : Sure Horizon cover up death all the time, but this was diffrent. This was no no name wage slave. This was Johnson Sean, a very popular and beloved fighter. Its a miracle they haven't revoke his SIN yet.

Poor Self Control ( Thrillseeker ) : Bruce is always looking for a good fight.

Record on file, SINner ( Corporate Limited ) ( Horizon ) : While Horizon have cut all ties with Bruce , they still have to keep his SIN. 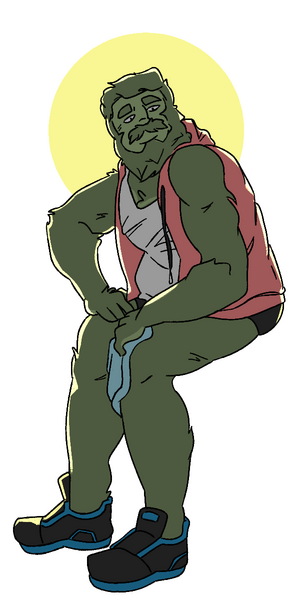