One of Horizon’s newest idols, Hina Hitorigurashi (pictured below), has broken into the scene in a big way, releasing three tracks that exploded in popularity more than anyone could have expected. Her cover of Light Up The Night, while not too exceptional in terms of her singing, had some of the best dancing HBI 48 has ever seen out of a third-string. She followed that with a very unorthodox video that landed quite well. “All Eyes On Hina” was a masterfully edited parkour video with her singing overlayed onto it, matching the tempo and pacing perfectly. Proving that she isn’t always high paced and over the top, her newest track, a cover of Little Me, is a tear-drawing emotional piece with her best singing to date. I don’t know about you but we here are looking forward to what comes next. 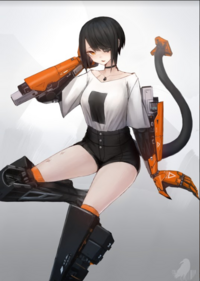 The news has three other posts linked to it, the three videos mentioned.

Light Up The Night -Hina Hitorigurashi

The first video doesn’t have anything fancy, just her on top of a building that’s oddly familiar to anyone who has been brought to the metal scaffolding skyscraper. {{#spoiler:show=Show Rolls|hide=Hide Rolls|5 hits on singing, 12 hits on dancing}}

All Eyes On Hina -Hina Hitorigurashi

The video mixes the gentler shots of her standing on a crane, posing at the top of the same tower seen in the first video with the high-intensity shots of her running. During the final slow moment, there is a very dramatized version of her doing the backflip off the wall, and then apparently falling, landing at the instant the music takes off again. It ends with her swinging and standing atop the crane, the city behind her fading to black, then she herself until only her cyber eyes are left, which then blink out. This is all set to the song All Eyes On You

The third video is a return to the original form, just her on top of the building again. {{#spoiler:show=Show Rolls|hide=Hide Rolls|7 hits on singing, 7 hits on dancing}}