Mr. Johnson (Ork Male) has requested a team of runners to deal with a violent problem. He specified that guts was required for the job, and the team needed to be ready to spill blood...

The team received a call at 10 AM from the Mr. Johnson, to meet with him at 6:30 PM at Club Penumbra in Downtown Seattle, while telling the runners that if they come across the bouncer there, then simply tell him to ask for a 'Omega-5'. The team prepared and made their way down to the area, though they encountered a slight hiccup along the way. A man, high on all sorts of drugs who was clearly a burnout drug addict, attempted to offer inappropriate services for cheap nuyen. Both Cyber Knight and Energizer responded in a polite manner to get the man away, until Wolfheart intervened with an 'alleviate addiction' spell to free the man from his drug abuse. Once the man came to his senses, he darted away, confused, but relieved.

Once the team approached the bouncer and requested to see an 'Omega-5', they were allowed inside without trouble. With a bit of guidance from one of the bartenders inside Club Penumbra, they were directed towards the Mr. Johnson, who awaited them on the second floor of the building. Mr. Johnson was a cool fellow, clearly a man who understood what life is like for the underdogs of the street, beneath the heel of corporate oppression. He made it very clear that he couldn't rely on corporate help for this job, which is why he turned to hiring shadowrunners.

He revealed the details of the job : A few nights ago, several metahuman kids (2 orks and an elf) were harassed by members from the Night Hunter gang, who attempted to torment and kill them. Mr. Johnson intercepted, saving the kids, and driving the night hunters back. Unfortunately, the Night Hunters didn't take this lightly, and vowed to get back at Mr. Johnson. They attempted scare tactics to warn him and the kids that they were going to die, and their time would soon be up. Mr. Johnson revealed the culprit who led this particular group of night hunters.... a cybered up human racist by the name of 'Reaper'. The team's objective was to eliminate Reaper and his goons for good.

With the key information given, Mr. Johnson requested for the team to meet with him at his place, which was 2 miles south of Lake Forest Park, in one of the lesser known neighborhoods.

Shortly after the meeting, the party made initial preparations before heading down to Mr. Johnson's house. Wolfheart did astral scouting to identify the main threat, clearly pinpointing him at Lake Forest Park. Once the party met with Mr. Johnson at his house, the plan would be arranged. First, Neko and Energizer would stay inside with Mr. Johnson and the kids to perform matrix recon within safe walls. Cyber Knight stood guard outside as the most immediate threat to target, while Bad Rep got into ambushing position outside with stealth. Wolfheart summoned a fire spirit, and stood near the doorway inside Mr. Johnson's home to prepare for the incoming assault of Night Hunters. What the team needed to do was straight forward : Kill the incoming night hunter goons that's coming after Mr. Johnson and the kids, then once their numbers have been thinned out, they would go to deal with Reaper himself.

Once the team met with Mr. Johnson at his house, they got into position accordingly to prepare for the incoming assault from the night hunters. Once they appeared, Cyber Knight was the one to be targeted directly due to his immediate presence in the open, and the fact he was an Ork, which Night Hunters were extremely racist against. The night hunters that came in packs had both bruisers and snipers, and it was up to Neko and Energizer to shut down the snipers from firing effectively, due to them taking full advantage of wireless enhancements. Wolfheart and her fire spirit would provide firepower support from behind, while Bad Rep utilized stealth to remain completely unseen by the opposition, and taking a surprise shot against the night hunters. Cyber Knight would be the front line combatant, taking on the night hunter menace head on with his considerable combat skills. With the team coordinating their efforts to great effect, the night hunter assault was completely repelled, as no enemy was able to get past the runners to break into Mr. Johnson's home.

With the initial assault stopped, the team then organized to take the fight to Reaper himself at Lake Forest Park. When they got there, they encountered multiple dead gangers who weren't Night Hunters, with Reaper and his best goons victorious over the bloody conflict there. Neko made efforts to hack into several night hunter assault rifles which ran wireless, while Cyber Knight stepped forward to challenge Reaper to a duel. Energizer provided matrix support via AR guidance for her colleagues, while Bad Rep used her Harley-Davidson Scorpion bike to deliver lethal force through ramming down her foes. While Cyber Knight dueled Reaper in a head-to-head sword fight, Wolfheart and her spirit would harass the opposition with a variety of spells and magical effects, including poison to give some of her foes a slow but painful demise. Regardless, after a long and gruesome battle, the night hunters, including Reaper, were utterly destroyed in some of the most fantastical displays of wrath ever, which was fitting for a band of child-killers and metahuman torturers. No mercy was shown to these gangers, with none of them surviving the conflict against the runners. 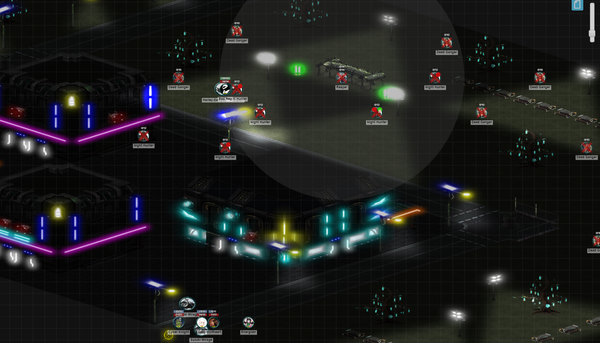 After the battle against Reaper and his goons at Lake Forest Park.

As proof for Mr. Johnson, Reaper's head was presented as evidence of the deed. Once the job was done, they met with Mr. Johnson for their pay, though some runners refused the pay outright, preferring to let the kids have the nuyen instead, as they needed it more than the runners did. Honored, Mr. Johnson welcomed the runners to visit his home at anytime, with his actual name revealed to the runners : Nukem. 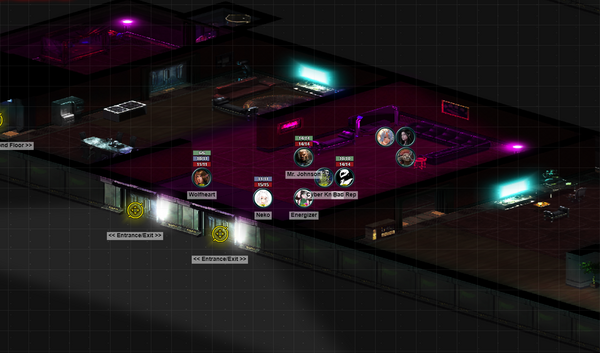 Meeting and concluding the run after returning to Mr. Johnson and the kids at his home.

One of Bad Rep's contacts salvaged what they could from the dead night hunters, which granted the runners some bonus nuyen as payment. In the aftermath, Mr. Johnson, along with several other natives from the neighborhood took notice of the runners' deeds, and would whisper among the shadows of the heroes who saved the downtrodden from racist predators who knew no compassion.

As the wildfire burns away the dead wood returning its nutrients to the soil, so did we burn away these gangers in a hail of steel and flame. Wolf urged me into battle, and I bayed for their blood. No one gets to decide what races live or die. No one gets to force others into servitude. Our work may be but a drop in an ocean, but enough drops become a storm. I have no regrets. I hope Nukem and the children fare better from now on.

Neko: Fufufu, these fraggers were no match for my hacking and over watch skills.