Night of Fire the 2nd 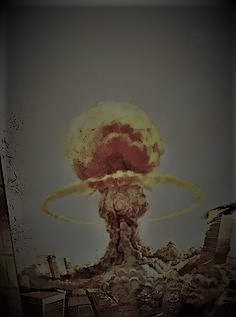 In the night of Sunday of 08-18-2080 the heart of the Halloweener turf was shook by a explosion so huge it formed a mushroomcloud.

The center of the explosioin was an apartment building that was probably used by the Halloweeners as fuel depot.

The building was completly annihilated and the surrounding buildings are either on the verge of collapse or destroyed,

the shockwave shattered windows as far as six blocks away from the epicenter only a few civilians were wounded by flying glass shards.

on the explosion site a Halloweener (who's now deaf) quoted :" There were atleast 6 of our guys in there and 6 more went in seconds before evrything went of."

A couple secends later shit went down real bad for their whole turf because the fuel that went up came down burning,

and burning down a lot of wooden structures and a few buildings.

was an event caused by the mage Nadia Mirin in 2055 as a result of a intruige between NAT and the Yakuza she burned a whole street to ash and dust.

The summary of the event is  one building completely annihilated, a couple of buildings destroyed even more on the verge of collapse,

hundreds if not thousands of windows shattered, a dozen Halloweeners dead and atleast twice as much heavily wounded and fires burning all over their turf some who still burn the day after.

The consequences of the explosion are that the Halloweeners reinforce their security.

The question that remains unsolved is who or what caused this devestating mayhem ? was it an accident from the Weeners, was it an attack on them or was it a fire spirit who thought this is a nice place to stay?


This Newsfeed was sponsored by 21 Neon - Shine Bright