Footage of one of the ruined pseudomethamphetamine-producing buildings. 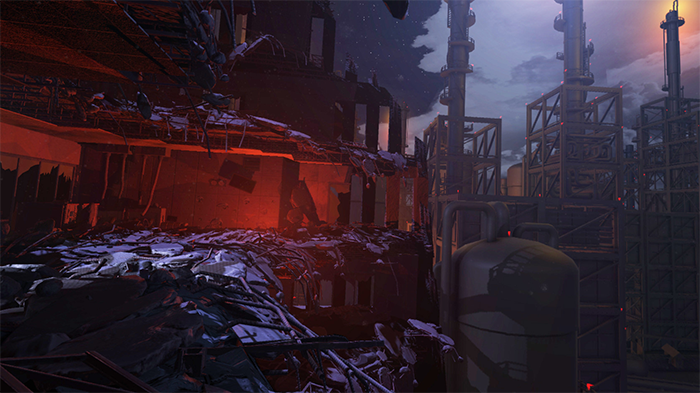 Activities of criminal elements in the lawless barrens of Redmond have always been a difficult topic for Knight-Errant, our beloved law enforcement agency in Seattle. In the last six months, however, there's been a noticeable decrease in some activities organized crime enables among SINless and even to us law-abiding citizens. Bellevue's had an 8% drop in violence-inducing intoxicating substances such as Betameth, Nitro, bootleg Kamikaze, Woad and Push. Downtown's supply has dropped by 5%, Snohomish by 12%, Renton and Auburn by 11% and Redmond itself by as much as 21%.

On the street, these are known by many nicknames. The unsupervised and highly illicit production create dubious product at best when staffed by self-taught drug gurus. Many medical studies of confiscated doses of these substances have resulted in alarming discoveries. Impurities can show up in as great of a concentration as 45% of the entire dosage, meaning any individual funding these kinds of dangerous by purchasing their product is doing so at the cost of their own lives, willingly poisoning themselves with nearly half of the costly commodities they are peddled.

The recent drop in the amount of these substances can be attributed to Knight-Errant sanctioned private investigators' work in these dangerous parts of the sprawl, discovering lab after lab owned by violent and murderous gangs like the Crimson Crush, Skraacha, various Yakuza clans and even members of the Vory. The laboratories were found partially collapsed, filled with decaying bodies of various metahumans (often goblinized metatypes) wearing the colors of whatever gang illegally repurposed the corporate property as their illicit substance production center. Many were also found to have a foreboding message spray painted near them.

The camera pans to a half-exploded suburban home, the wall facing the camera having large text graffiti'd onto it: "NOWHERE IS SAFE FOR YOU"

We've asked our foremost experts in gang politics for any information that can be publicly disclosed. According to one of our local Seattle-raised experts, this is an unusual sign of gang violence. While they often fight amongst themselves for territory or material gains, leaving innocent bystanders in the crossfire due to having no regard for anyone but themselves, these attacks target the lifelines of many criminal groups whose income relies heavily on the drug trade. Most shocking is that there is no evidence of the existing drug shipments being stolen. They were instead burned or destroyed on site with the rest of the facilities, implying whoever is behind these attacks has no interest in stealing the products to sell on their own.

Footage cuts to a bald, wrinkly human male with olive skin and a slight accent clearing his throat. "Clearly, this is still criminal activity. If we had any sanctioned and legal operations going on in that area, we wouldn't be investigating it. This may be the act of disillusioned elements of the underworld striking back out of nothing but spite. This, if anything, shows just how unempathetic and vile these kinds of SINless individuals grow up to be. Even when they leave behind their life of exploitative crime, they do it only to turn around and cause more destruction. I say we enjoy the silver lining: there's less of that filth flowing to plague working and good-natured people in better parts of the sprawl."

Other experts suspect this may be tied to the increase in paranoia many gangs have begun exhibiting in their conduct. They move less often out in the open nowadays, opting to stay inside of buildings, wearing disguises, hiding their gang colors and logos and overall concealing their presence outside of graffitis and flags. This may be due to a continuous amount of murders that have been reported on lower-ranking gang members belonging to various factions in the Redmond Barrens. The culprit of this is as of yet undetermined, but many believe it is only a matter of time before this leads to yet another motion to further militarize criminal elements and strike back against whatever harries their operations.

Further details may be released if they are deemed safe for public release. Investigations are still ongoing and all are advised to use Knight Errant's hotlines for providing tips, sightings or information. Remember: turning yourself in can reduce your prison sentence by at least five percent due to good behavior. Consider your life choices before opposing the law.

This has been Knight-Errant spokesperson Samantha Burnett.