The Mr. Johnson has requested assistance from runners to watch over his daughter on her date night with a shady character that he had suspicions about, by the name of Axel Lox, a human who met the Mr. Johnson's daughter, Kira Dames, at the University of Washington. Mr. Johnson had noted odd behavior from Axel, spotting him communicating with a troll over a commlink, while Axel spoke of Kira as if she was some sort of object. Since this was personal for Mr. Johnson, he wanted to meet with the runners personally at a Soykaf shop in Downtown Seattle, to explain what has been going on, and hopes that the team can keep her daughter safe, and bring an end to Axel and his associates, by killing them all if sufficient evidence proves that Axel is corrupt...

The team initially spoke with Mr. Johnson over a voice conference call. He had requested for them to meet with him in person in Downtown Seattle at 7 PM, at a Soykaf shop. The team went there, traveling with their own methods (Wildman, Neko and Slink drove their vehicles while Reverie used astral projection instead). Before they met with the Mr. Johnson, the team noticed a bit of commotion going outside near it, behind a stuffer shack in a dark alley. There were thugs harassing a civilian, attempting to take his nuyen by force. While Slink went inside the Soykaf shop to meet with the Mr. Johnson, Wildman and Reverie dealt with the thugs quickly, through awakened scare tactics.

Upon meeting the Mr. Johnson, who was an elven male in a high fashion suit, he shared cups of Soykaf to the team before leading them outside to discuss matters more privately. He revealed his concern about his daughter, Kira, who has a date that night with a shady Axel Lox. Originally, he didn't think much ill will towards Alex Lox, but after revealing to the team that he caught Axel discussing questionable matters with a troll regarding his daughter, he suspected something was up. He asked the team to kill Axel and his associates, provided that sufficient evidence was gathered to expose their twisted natures.

Mr. Johnson told the team that his daughter Kira would be at the Sybrespace nightclub with Axel Lox. He gave the team tickets to get past the bouncer there for access into the nightclub that night. The team's plan was to keep an eye on Kira, gather proof of Axel's darker motives, and if evidence was present, then they would kill Axel and his partners in crime.

The team headed over to Sybrespace, with Slink entering the nightclub while everyone else remained outside. Reverie took the time to set up DNI, while Neko hacked Axel's commlink, keeping tabs on all incoming and outgoing matrix traffic. Through this, she was able to learn the identity of Axel's troll partner. It was none other than 'The Big Cheese', who was a group leader for a certain band of thugs. As Neko slowly unfolded the plot of Axel's corrupt nature, Slink kept tabs on Kira and Axel in the physical world within the nightclub itself. Reverie would perform assensing, identifying another curious individual within the nightclub, who happened to be a mysterious fox girl shapeshifter. As Neko honed in on the location of 'The Big Cheese', which was an abandoned warehouse within the outskirts of Downtown Seattle, Wildman would send his pet rat to scout the area, and discovered a whole group of disassembler gangers waiting there.

Neko learned that Axel was to escort Kira over to them, though Axel also made note of the fox girl who captured his interest. Once 'The Big Cheese' revealed his intentions over the commlink, the team had sufficient evidence to act. It was clear that Axel and his associate wanted the girls for a sinister purpose. Thankfully, Wildman prepared himself to ambush the disassembler gangers who lurked at the warehouse. Meanwhile, once Axel began to make a move to escort Kira out of the nightclub, Slink intervened, using his skills as a con to get Kira's attention. Kira caught onto what was going on, and listened to Slink, playing along with his plan. As he proceeded to greet Axel right outside the nightclub, he used a shock glove to damage Axel and repel him. Axel immediately draw an Ares Predator V pistol, about to open fire at Slink. However, the Ork Bouncer, Bob, intervenes. At first he was going to talk to Slink harshly about his attack on Axel, but upon seeing Axel retaliate with a gun, he stepped between the two, asking them to settle down. Slink and Axel then attempted a battle of wits, using their negotiation skills to get the bouncer to side with them. Axel lost, and the bouncer ended up favoring Slink, followed by sucker punching Axel unconscious. Slink had directed Kira away for safety, which she found in Neko's care, remaining secure in Slink's vehicle.

In the midst of this, Neko had quickly squelched Axel's commlink, so he could not call for backup. Slink explained to the bouncer what was happening, and the bouncer understood, deciding to join the team to deal with the gangers. The fox girl caught onto what was going on as well, and decided to help, following her own motives. Meanwhile, 'The Big Cheese' started to grow irritated by Axel's sudden silence, so he and his gangers decided to venture out to try meeting up with Axel instead. As this happened when they stepped out of the warehouse, Wildman, and his beast spirit, ambushed the gangers. With battle breaking out, the rest of the team, along with the fox girl and Bob the Ork Bouncer, joining in the fray.

The team held their own against the odds, and Wildman's prowess in a bear form brought unprecedented carnage against the gangers...something they never expected. Unfortunately, as Bob the Ork Bouncer entered the fight, he was quickly overwhelmed by a band of troll gangers who severely injured him with combat axes, knocking him unconscious. Meanwhile, Neko would offer matrix support, enhancing the team's AR with better combat efficiency. After Wildman delivered the decisive blow to put down 'The Big Cheese' once and for all, Neko took the opportunity to hack into his commlink. Through this, Neko learned the full details of the plot.... it turns out that Axel was an aspiring disassembler, seeking to earn favor and respect from 'The Big Cheese'. They wanted to deliver Kira to Tamanous Organ Legging, so she would be a breeding slave. The price Tamanous offered was 50,000 nuyen for Kira. After Axel learned of the fox girl however, she was to be marked for capture as well. 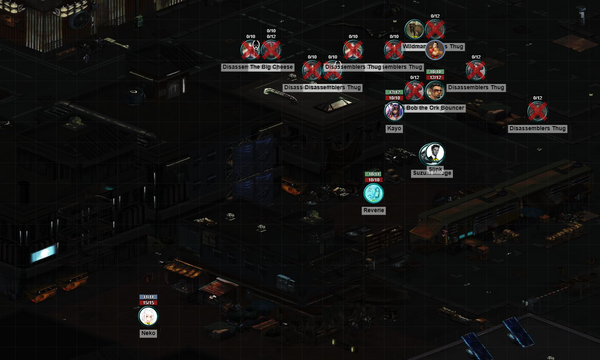 With full evidence unfolded of Axel's corruption, the team proceeded to finish off the gangers present, leaving none alive... except Axel who was still unconscious. The Fox girl was revealed to be 'Kayo', a female fox shapeshifter who serves the bear mentor spirit. The spirit, bear, had guided Kayo towards Wildman to watch over him, just incase. Bob the Ork Bouncer was stabilized and healed by the team, and Mr. Johnson was contacted of the job's success, with proof delivered. Mr. Johnson then requested for Axel to be brought to him...

After the run's success, the team brought the unconscious Axel to the Mr. Johnson. Slink proceeded to hand him a pistol with a silencer attached, with 1 round in the magazine. Once Axel awoke, a confrontation occurred between the two. Mr. Johnson was displeased with Axel's corruption, though Axel responded in a vile manner. This drove the Mr. Johnson in a fit of rage, as he proceeded to brutally beat Axel with pistol whipping him across the head repeatedly. Finally, he stuck the gun in Axel's mouth, and pulled the trigger, ending his life. After that, Mr. Johnson paid the team with the nuyen promised, and thanked them for saving his daughter's life. He and his daughter reunited with an embrace, before the two returned home.

Slink offered to dance with Kayo at the nightclub, which she accepted.

After scaring some thugs in an alley, Neko, Reverie, and Wildman join Slink at the Johnson meet. Johnson meets us at a Soycafe in Touristville. He's an awakened and a worried father. He tells us he's worried his daughter's new boyfriend (Axel Lox) is trouble, but can't pin down what specific kind of shady business he wants his daughter (Kira) for. The couple are going on a date 1 hour after the meet at Syberspace, a club about block away. Johnson will pay 4,000 nuyen each to tail them, find out what Axel's true intent is, and upon confirming it's as bad as Johnson fears, kill him and his crew. The team accepts the arrangement as is.

Neko got to work finding and hacking Axel's commlink and found that he was communicating back and forth with a troll named 'The Big Cheese' who was referring to Kira as "the package" and that they were arranging something that night. Slink made his way inside the club with a pass provided by Johnson and got into position to track the couple upon their arrival. Reverie, while scouting the astral noticed that Kira was awakened and that there was another awakened being in the club on the second floor with an 'animalistic' aura. Wildman and his seeing-eye rat tracked The Big Cheese to a nearby warehouse that held a bunch of goons standing by. Back at the club, Slink kept tabs on the couple and found the extra awakened being to be a fox girl who Axel had tagged as a secondary package for later retrieval. He then led Kira out of the club where Slink delayed them using the powers of bulldrek. Slink secured Kira's escape to his car with an electrified handshake to Axel, and followed up with filling the bouncer and the fox girl on Axel's plans. Convinced by the story, the bouncer knocked out Axel and agreed to help keep the girls safe.

Back at the warehouse, Wildman shifted the bear form and dropped in on the gangers who were spooked by Axel's failure to deliver. The rest of the team plus Bob the Orc Bouncer and Fox Girl and a few spirits came to join in beating down the goons. Cracking Big Cheese's commlink, Neko found that the gang (The Disassemblers) were going to deliver Kira to the Tamanous Organleggers as breeding stock in exchange for 50,000 nuyen and secure Axel a permanent spot in the gang, then go after the Fox girl for a bonus favor with Tamanous. Bob went down quick but was soon backed up by Slink and the Fox, the goons made one last desperate grab for the Fox when the last of them were put down. Satisfied with the carnage, the team resuscitated Bob and regrouped at the club entrance to pick up a still knocked out Axel and a freaked out Kira. Slink called up Johnson, assured him that his daughter was safe, the threat was neutralized, ample evidence available, and that he was welcome to personally execute Axel if he saw fit.

Kira and Axel were delivered to Johnson, and using Slink's pistol, Johnson brutally beat Axel before killing him. A job well done. The team was paid, and Slink went out dancing with Koya, the Fox Spirit.