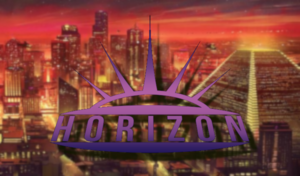 The Horizon logo flashes over the Seattle skyline as the program starts.

An attractive human news anchor taps an ARO stack of papers on the desk in front of her.

"Breaking news from Bellevue, the Ares Macrotechnology Pacific Northwest Headquarters were the scene of a public incident a few hours ago. Witnesses report seeing glass shatter on the one-hundred-and-seventh floor, followed by a heavily armed team gliding down to the streets moments later. Supervising Vice President Karen King had this to say:"

The program cuts to a conference room, with Karen King standing before a podium surrounded by photography drones.

"Earlier this evening, a team of Knight-Errant high-threat response officers equipped with wing suits jumped from the one-hundred-and-seventh floor of our Seattle headquarters to the streets of Bellevue below. No one was injured in the exercise, and no harm came to any Seattle property. Damage to Ares Macrotechnology property was minimal. While the training exercise was intended to remain within the confines of the building, we applaud our Knight-Errant officers for taking the initiative to complete their objective without collateral damage to the city they serve. Rest assured that in the event of a real emergency, Knight-Errant will take all necessary measures to keep Seattle safe."

The program cuts to shaky commlink footage of several people in unmarked wingsuits with mostly non-Ares gear getting tangled up in an awning before another runs up to help free them. One of them seems to be covered in chunks of a sticky, insectoid, web-like residue. Hiding their faces from the camera, the team then piles into a modified Roadmaster before peeling out of a parking lot and disappearing around a corner.