🎪 On The High Seas

Max Malini has, through the work of his people, gained information and put it together realizing a big opportunity. But he lacks the resources to act on it himself, and so he turns to runners to claim the prize before other parties put the pieces together. 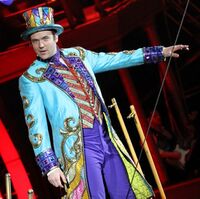 The team is asked to come to the Tacoma Fairgrounds (where the Malini Circus of Wonder is currently set up) and show a specific ARO to the man at the gold gate before 11:35 AM. After showing the ARO, they're given AR directions to the staff area where all performer’s wagons are located. They’re led to a wagon with “Max” on the door.

Max explains the situation and job to the team, and describes a ship that has been attacking ships out at sea, and stealing goods and kidnapping people. But the real prize is a chest full of gold coins which can be found below deck. He wants it, but has nobody who is specialized for this sort of job.

The team sails out to sea on Dandy's air boat with a water spirit using weather control to give them smooth sailing. They then also use the movement power to make the boat go much faster than it was ever designed to go. This causes it to break after a while, and we actually got to se a use of the Nautical Mechanic skill! It was a great moment that totally justified the karma Dandy spent on it.

After reaching the suspected area, the team checked for the transponder periodically. Eventually, the spirit reported that something was fighting against its weather control, and the skies started to darken and a storm starts to brew. A Guard power used on the team protects them from the worst of it, but the team is still considered to be under suppressive fire. 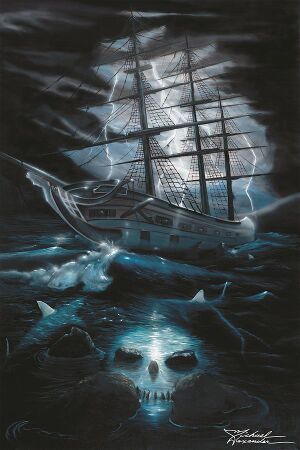 The transponder signal is picked up, and the team closes in on it. they find the ship they are looking for is attacking a pleasure yacht. They realize quickly that it is, as they suspected, a Ship spirit... Which happens to be force 10. The idea of a direct attack is quickly dismissed when it is realized that a force 10 spirit is likely going to hit on its force shot, and that canon will likely destroy their airboat in a single hit. they position themselves so the yacht is between them and the ghost ship, and get as close as they can.

Kani and Wolfheart use a grapple gun to catch the rigging of the ghost ship, and pull themselves up onto the yacht and swing across to the ship. Dandy sails around to the other side to tie his airboat off on the ghost ship before climbing up, and Reverie takes her spirit below deck to recover the gold, but finds the captain- a Force 8 Guardian Spirit.

A fight breaks out. Wolfheart runs below deck to help against the captain, and Kani realizes the crew of the ship are made up of terrified people who have been kidnapped, and are willing to fight out of fear of what will happen to them if they don't. She uses Paralyzing howl to neutralize most of her attackers.

The fight against the captain nearly disrupts him but the captain calls for parlay and surrenders. The team strikes a deal with him. they get his gold and return the crew. Realizing that the spirit will continue taking more people if a better solution is not found, the team decides to offer to help him find a more willing crew. A Spirit Pact is formed, and Reverie, Wolfheart, and Kani remain on the ship while Dandy takes the gold back to Max, which actually works because Dandy is a genuinely nice guy who doesn't take the gold and retire on a private island with it.

The team gets a look at a metaplaner version of a map, and picks out a place that "feels right", and the ship opens an astral gateway and brings them through...

Revere, Kani, and Wolfheart are now all in a metaplaner quest. Their fates will be determined in a follow-up run.

Water spirits are so helpful! I don't know why people don't ask them for help more often! We went so fast, our boat got where we were going in just a few hours even though the GPS device said it would take a day! And it helped fight the storm, though it could only do so much. That ghost ship was really powerful! So was the captain, but I hit him with a taste of his own medicine! I hope we can find him a good place to sail the seas soon. People shouldn't have to be kidnapped by him...