Moth, Samba De Sangre, and Desdinova were hired as a backup when the band who needed to perform disappeared.

Previous performers ghosted the Johnson, forcing them to hire runners as performers.

It was fairly brief meeting in a warehouse turned club. Johnson provided them with pyrotechnic, smoke and mirrors, and sound system. Everything else was on runners to organize themselves.

With Moth's knowledge of fashion, Des' history of metal and Samba's punk rock powers they fused into most head banging brain blasting mind melting ear deafening eye blinding tribute to gods of 20th century metal and rock! Picking the stage name of Zebra Lion Fish, they added black leather and as much as possible spikes with heavy pink parts, Desdinova's heavy security armor was also equipped with a flaming mohawk. Practicing on making crowd friendly flamethrowers and pillars of light. For extra safety they started making sunglasses with Zebra Lion Fish logo (with very tiny font written that they in fact do not keep safe from flamethrowers).

As the night of concert arrived the team steeled their nerves to face the crowd, the concert shattered the roof (metaphorically), with a snowstorm of novacoke and the crowd gone wild from their performance, ending it with a rocking to Rammstein - Amerika.

The high on life runners were paid in full without any issues.

Moth here! This was my 33rd run. How great is it that we were just hired to do a concert? The three of us made a great team. We are all very charming, and skilled performers. I mostly played keyboard and danced. Samba rocked the guitar and fire breath for the effects. Desdinova sang and provided a column of light and flame throwers. I think Zebra Lion Fish is a smash success! We could go on the road!

Ahhh this takes me back, a concert fitting of old rock gods. Samba and Moth do know how to rock it out, really brings a tear to my eye... Playing all the classics putting on the good old leather, pyrotechnics, then ending it all with Amerika. It was a worthy tribute putting this old geezer at peace. 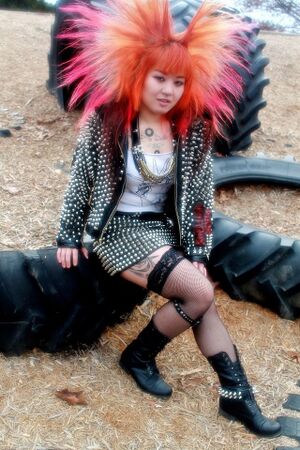