A Mercenary group help the Firefighting effort in California !

The N-51 plane in action 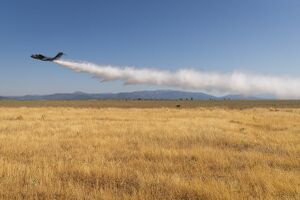 "Carly Reeves here at one of the many improvised firefighter outposts in California. “Amongst the firefighters here on the ground, there is a widespread sentiment that the authorities didn't react properly to the sudden outburst of wildfires. Thankfully the mercenary group known as Task Force November 51 has made an appearance, bringing a firefighting plane and support to the local population."

The picture switches from the reporter to a display of tents, N-51 personnel and firefighters in busy activity. The firefighting plane can be seen landed near the shore of Clear Lake (according to the report), the noise of a huge pump in action can be heard as some engineer can be seen doing some check up on the engine. The pilot is standing next to the plane, and Carly walks in for an interview.

Carly: "Hello sir, do you have a few minutes for an interview ?"

The pilot seems to look away for a moment, exchanging a quick hand sign, and he seems pissed off. He lights up a cigarette and throws an annoyed look at the reporter.

Carly: "Then Mr. Spad, people want to know what it is like to fly such a big plane so close to the ground? Especially in such dire conditions?"

Spad: "Well, not gonna lie, it's pretty hard cause of the hot wind, the smoke, and all that. Even with electronics and all, it's really dangerous especially at night where we can only count on IR and night vision, you know?"

Carly: "The plane seems grounded for now, does that happen a lot?"

Spad: "Well this is a bit of a bootleg firefighting plane, usually they can catch water by themselves. We need to land and pump water...But it takes 5 minutes, so we can still do a lot of drops per day."

Carly: "So you're flying day and night at the moment?"

Spad: "Yeah, we have pilot rotation, and when we are too tired we dose on long haul...Someones gotta do the job right."

Background Engineer: "Tanks are full, everything is green! Ready for takeoff!"

Seemingly pleased by the news, the footage shows the pilot running toward the plane, less than twenty seconds after he boards the plane engines are on. The four turbines roar as the plane gains speed on the dirt and grass airfield, and after less than a mile of acceleration the A400M rears up and takes off in a spectacular fashion for such a big aircraft. Then the camera zooms back to Carly.

"Surely it is impressive to see them work. There are rumors swirling in Seattle, though, that this firefighting action is actually meant to mask a clandestine operation being run by another element of N-51. To address those rumors, we now have a chance for a quick interview with the N-51 commanding officer Le Bourguinion. The camera makes another switch as said officer can be seen coming toward the reporter, parting ways with firefighters and other soldiers. He keeps his full body armor on and makes a short bow with his head.

Carly: "Greetings sir, and thank you for the interview."

Carly: "Rumors say that this public action hides a darker face of your organisation, is that true?"

Le Bourguinion: "Well we are old french special operative for the core of the unit. Can't say anything about that, but after the Neo-Revolution we left everything behind to fight for a better cause."

Carly: "I see, but according to certain testimony, you still have active... special operations. Is that true?"

Le Bourguinion: "Of course, we have specialists that we use for irregular missions. For example, some of our best elements are actually providing support to the firefighters to navigate through the fires and avoid ending up lost."

Carly: "So nothing shady? Just specialists?"

Le Bourguinion: "Yeah, I can assure you of that."

Carly and Le Bourguinion proceed into some more general questions about the N-51 firefighting operation so far. Footage of the aid camp is showed over the audio of their interview, showing a helicopter landing to offload rescued civilians and aid supplies being distributed to people who had to flee the flames. At the end of the interview, the camera transitions back to Carly.

"Without hard proof it's kind of hard to say what is true or not, but one sure thing is that today the N-51 proved that they could offer help in a dire situation. Maybe those rumors, even if they are true, are part of their past. Time will tell. This was Carly Reeves for KSAF news, signing off!"