A Decker that was born in redmond near Glow-City, where the social misery and the slow, painfull death of her irradiated close ones pushed her to become part of the infamous Eco-Terrorist organization "Terrafirst !".

Reveal to the world the damage polluting companies do to the Mana-Sphère, and hurt those as much as she can through the systematic hacking and revealing of their shady activities.

IRA3 has had a burning wrath that turned over years to a cold, calculated hate of a world that kills and destroy so much without concern in the name of the sacred consumption. She is trying to be open to others and succeds to a degree, but always end up on incessant ranblings about depressive subjects, making it hard for her to build lasting relationships outside of Terrafirst !. 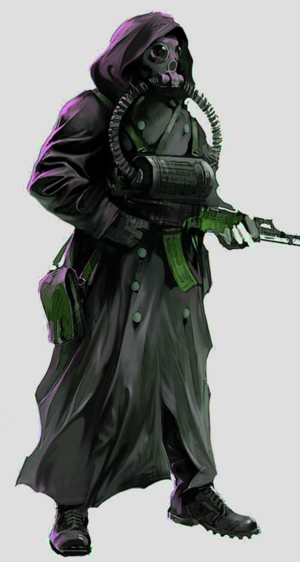 On her day-to-day, IRA3 is sporting mostly bio or custom made streetwear, she use ample clothes to hide her skin damage she endured while living in the Redmond Barrens. On the job, she wears a ballistic mask and a coat customized to look like a post apocalyptic survivalist's gear.

IRA3 on the matrix has a custom avatar of a Post-Apocalyptic survivalist, her MARKs look like radioactive barrels and her hacking attempts often take the form of invisible directed radiation, degrading matrix defenses to sludge.

IRA3 is a specialized hacker, and uses Hack On The Fly or Sleaze actions for most of her work. She tries to be of assistance to her teammates through the run by hacking hosts and their devices, clearing the way or getting intel on a target site. When the bullets start flying, she supports her team by using the "I Am The Firewall" (Kill Code, p. 38) and "Calibrate" (Kill Code, p. 37) matrix actions on them, boosting them from afar. Finally, IRA3 is an outspoken radical against any polluter, sadly this is most of the world, so she will often need to contain herself as to not expose someone's Matricial history because they littered, or to not force them to eat the paper they just threw in the garbage can instead of the recycling one... with her gun.

IRA3 uses an Aztechnology Shadow Warrior cyberdeck, Granting her a Specialized array of 6543, and 6 programs slots (3 of each are from the deck, 3 others from the Datajack + implant). This deck is such that if the highest rated attribute is Sleaze, it benefits from a bonus of one is Sleaze, making it very good for sleatly operations. The cyberprogram Smoke & Mirrors increases her Sleaze rating by 1 to 5, but imposes an equal amount of noise; however, IRA3 has 3 antennae in her Cyber-ear, a piece of cyberware that reduces noise by 1 each. Her datajack also reduces noise by 1. To further mitigate the downsides, the cyberprogram Signal Scrub can be loaded to reduce noise by an additional 2 points. This adds up to 6 total points of noise reduction, allowing Smoke & Mirrors to be run with little issue. The cyberprogram Stealth grants +1 to Sleaze as well. With the whole set-up, IRA3's Sleaze can run up to 13, which combined with her Logic of 9 and the Data Anomaly quality gives her a comfortable amount of 24 dices to avoid being spotted when running silent. It's extremely difficult for anything to see her in this mode. Make sure to run the Baby Monitor program if you are newer to decking and can spare the slot; it will keep track of your overwatch score for you, making it easier for you to avoid certain matrix threats.

IRA3 is not incapable of cybercombat, but is far from proficient at it, if she ever finds herself spotted on the job her first reflex would be to hide. If however for any reason she cannot, she can try and finish her hack before the ennemy bricks her deck thanks to her two hardening modules, giving her deck a total of 20 boxes to resist matrix damage before being bricked. If however her objective is not crucial, she will prefer not risking link-lock and disconnect.

IRA3 is knowledgeable about Redmond and Seattle at large, as well as with the matrix in general and it's codes. She has academic experience of mechanics jobs, and is part of Terrafirst !. She can scour the matrix for information with the Matrix Search action (SR5 241), rolling 14 dice (or 16 in hot-sim VR) to locate any information that might be publicly accessible, even if it's fairly obscure. Make sure you take the time and configure her cyberdeck to swap Data Processing to the deck's highest attribute as it will serve as the limit for the test. The program Browse will halve the base search time, and the program Search will give a +2 to matrix searches performed in a host. Toolbox will raise Data Processing by 1 as well.

In combat, IRA3 will be better out of the action, the safest place for her will be in her car's rigger cocoon and on the matrix. She should primarily take a support role in combat, boosting her teammates through the matrix using Tag (Kill Code, p. 40) for offense, I Am The Firewall (Kill Code, p. 38) for defense, and Calibrate (Kill Code, p. 37) for initiative. If the team is facing enemy drones or vehicles, she may be able to destroy them on the matrix with the Data Spike action (SR5 239). Alternatively, she can cause them to malfunction with her directional jammer or through other matrix actions.

If necessary, IRA3 can use her Cavalier Evanator to get out of pinches. She do not have a very high dice pool but it can serve as a last resort if all else fails.

-> Risky passive (In a dangerous place, where she is likely to be attacked)

Amelia was born in the Redmond barrens, in a place that was not safe to live in due to the low radiation but where her Surged parents would be safe from the intense metaracist campaign of Brackhaven and it's supporters. In the barrens they found a life of sorts, the father within a gang and the mother taking care of the then young Amelia.

One day, the father would not return. And thus although Amelia had grown up, the public school fee and protection tax from the gangs still needed to be paid, her mother had to find ways to pay and she did, at a price many could not realize. Years passed under this new routine, mom went to work and Amelia stayed at home, going through the public school virtual curriculum. The fee for school being based on performance and her being somewhat of an underarchiever, she figured out over time how to exploit the matrix protocols to her favour and falsify her grades, thus keeping the fee at such a low rate that she would make it into vocationnal school for mechanics and study there for years.

But not all was green in wonderland, as her mother started to develop symptoms of acute radiation poisonning, to which she was especially sensible. Quickly Amelia searched for solutions but the only one that seemed appropriate was clinical care from corporations, requiring astronomical sums of money to even pretend to. Not being able to even get an appointement, she resorted to the sleazy way, she trained 40 hours per day for months to learn how to infiltrate hosts better with her cobbled together deck, but her mom's state was deteriorating.

She had to act quickly, and thus did exactly that. She entered in a clinic's host and snooped around in search of the appointments file, she did her best but alas it was not enough. She was spotted as she opened the file by the Spider who immediatly overwhelmed her and her deck with harmfull biofeedback code, she felt her brain overwhelmed with signals it was incapable of sustaining and saw her own blood spill from her face on her mother's feeble body, slumping over and falling unconcious before hitting the ground from her deck's dumpshock.

She woke up weeks later in what looked like a scalper's den, and a dwarf quickly filled her in on the situation. He's a decker that was present during her hacking attempt, he saw her early and evaluated if she was any danger to him. Seeing as she was defusing a databomb, he concluded she was a fellow runner, although with a shitty deck. He watched as she was utterly destroyed by the Spider, and took pity on her. In a third of a second she recklessly hacked and traced her icon to her home, where he promptly went to, checking if she survived.

He found her on the ground next to a dead woman, still slightly convulsing but alive, and proceeded to pay out of pocket to nurse her back to life in what was a chop doc's business. Hhe presented himself as a fellow decker and became her mentor for a time.

Once she had enough money to get herself a good deck and had enough contacts, she found herself a cell of Terrafirst ! to join, and is now working with them under the pseudonym "IRA3", in reference to Dies IRAE, latin for "the Day of Wrath".

It was an instinct, to IRA3 every failure of the firewall of a system was an invitation to place one of her marks on it. With time, she learnt how to exploit this talent of hers and today is significantly better at it than most.

Ira3 fears being spotted and as such, she spend numerous years perfecting her hacking style to be innocuous to the eyes of matrix dwellers. She however never managed to hide from those pesky sprites, they see her every time and she does not understand how.

Whenever spotted, or in any danger, one must react fast to get to survive, and Ira3 learnt this lesson the hard way. Whenever initiative is rolled she benefits from a free matrix action before combat begins. It can be any of Brute Force, Data Spike, Hack on the Fly, or Matrix Perception.

If IRA3 fails a HOTF action or is marked in any capacity, she can instantly make a Hide test following a successful Remove Marks action.

When under pressure, IRA3 can go on full matrix defense, adding her Logic rating to her defense tests instead of Willpower

When she failed her dive and lost her mother, IRA3 was lucky to survive, but she will never forgive it to the world how it crushed her family under it's indifferent weight. Since joining Terrafirst! she can't stand seeing people not making the minimum to ensure the continued survival of the world and it's inhabitants.

IRA3 is driven to make people see the bad corps and the society at large is causing to the Mana Sphere, and will do anything she can to show the undeniable truth to the masses, that in their ignorance they contribute to the worst disaster humanity will ever face.

IRA3 always frees the data she recovers from corporations during her runs, especially if it is damaging to a Ecocidiary corp. When she is with a team that might object she often do not ask for permission and wait untill the end of the run to disseminate the data, as it gives her probable deniability. However, the pattern is starting to be visible and can be easily discovered by anyone with some knowledge of the data sharing scene.

Part of a Terrafirst ! cell.