Miguel Rivera has been hounded by his kids about the whole holiday thing, and they’re really upset that the “Holiday Spirit” doesn’t exist. The oldest says Santa isn’t even real, and the youngest won’t come out of his room. Miguel gets drunk one night and comes up with an idea. It’s not an especially great idea. But it’s an idea. 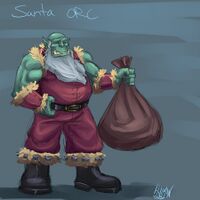 The team meets up with Miguel on a Renton street corner and... Oh dear God he's dressed as Santa and drunk off his arse. He offers Spider some fake elf ears and Christmas elf attire before explaining his situation at home with his kids, and his plan to teach them a lesson about Christmas. I'm just gonna post straight from my notes here because it was more or less a script I read from:

The team confirms that he said ¥10,000 and convinces him that's what he meant to pay them all along. He then goes to sleep everything off in his truck. Spider decides to hack his commlink to see how a garbageman got this kind of cash, and discovers that Miguel runs a profitable body disposal side business so lucrative that he can actually afford to buy the bodies he disposes of because he makes so much selling fresh ones to organ leggers, and less than fresh bodies to ghoul communities. They also find Miguel has a hard rule: No warm bodies. He seems to have no problem dealing with the already departed, but if he finds someone is giving him a body that is still barely alive he is not okay with killing them of handing them over to be killed.

Spider checks the host for Tiger Logistics, and finds the host sculpt is done up as a WWI dogfight. Se's inside her own biplane, and sees that data is transferred via the exchange of machine gun fire between the various planes. Before she can do anything, she realizes she is not the only hacker in the host, someone with a persona of a small white dog is flying on top of a doghouse, and tries hacking the order system to place a fake order. The system catches this due to having a large number of redundant checks that check with external sources, and the host goes on alert. The Security spider, in a bright red Fokker triplane, swoops down and gets the other decker in his sights and shoots him down. From all of this, spider realizes that simply adding fake orders to the list of orders to be filled isn't going to work, and instead hacks the system to get information on the personnel, layout, and security systems. Then her negative triggers and she makes a go for their secret santa list, encrypted by HR. She nukes the personnel file as well as the secret santa list, with the intent of passing Shaoz off as a new hire who just isn't listed because of the recent cyberattack which nuked everything, but the team decides on a different idea. With the host on alert after cracking the file, Spider attacks the security spider, and shoots that Fokker down. The GM is pleased, as this entire host sculpt was designed around that one single pun which I now got to make.

A little more research and legwork on the site reveals that it is an EVO subsidiary, and champions of the Seattle EVO Combat League 2078. Security is likely so light because every employee here is an EVO augmented loyalist who is combat capable.

After going over everything, the team thinks a smash and grab might be their best approach, They head up there and wait for the first truck to be loaded, Spider using perfect time and her Math SPU to judge how long it will take for them to finish.

Go time. Spider is back in the host, knowing they have to take out whatever security spiders are active to prevent counter-hacking later. She now sees that the night shift spider has been called in, as there are two Fokker triplanes. She easily shoots both of those Fokkers down and more or less has free reign on the host because the R4 host by itself isn't much of a serious threat. Once it's loaded up, she sends a command to the truck's pilot program to start driving and lock its doors.

Paladin runs after it, and hops on the passenger side. Shaoz crit glitches their run test, and avoids going under the wheels by using a point of edge to make it a normal glitch.

Calypso tries to climb onto the hood to shoot the security guard on the other side of the truck, but slips off the hood, avoiding the wheels but does manage to get a shot off on them. Paladin finishes them off as Spider unlocks the doors and stops the vehicle. Shaoz gets in, Paladin gets in, Calypso stays under the truck using her skimmers to avoid a deadly case of road rash.

That works great until the team, under the cover of wireless off and a jammer, makes it to Hell's Kitchen. Hell's Kitchen is not ideal ground for Skimmers, and Calypso takes 3 Physical damage under the car. She has the option of telling the team to stop. She really does. Unfortunately, the team did not hear her request. So, she decided to try climbing up onto the back of the truck while it was still moving. This did not go well for her, and she fell off, rolled onto a muddy incline, and fell into a pool of boiling hot mud.

After a few failed attempts to get out of this environmental hazard, Paladin and shaoz are finally able to rush over and help Calypso get out. She's in bad shape, and has plenty of first degree burns.

The team calls Miguel, and arranges a time and place they can meet up for the exchange.

The team joins Miguel as he takes his kids to the barrens to show them that there can still be good in metahumanity through kind acts done by regular, everyday people. The Christmas spirit is not dead, it's what individuals make of it.

"That works great until the team, under the cover of wireless off and a jammer, makes it to Hell's Kitchen. Hell's Kitchen is not ideal ground for Skimmers, and Calypso takes 3 Physical damage under the car. She has the option of telling the team to stop, which she does. Unfortunately, Shaoz says that Hell's Kitchen is too dangerous to stop the vehicle in. So, she decided to try climbing up onto the back of the truck while it was still moving. This did not go well for her, and she fell off, rolled onto a muddy incline, and fell into a pool of boiling hot mud. Shaoz takes a picture of Calypso in the mud to post to social media."