Two Star Blues at the One Star Bar

Two Star Blues at the One Star Bar 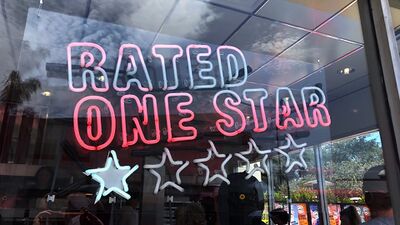 The One Star Bar, a fixture of Seattle's Touristville scenery

Tragedy struck today, as a... tolerated aspect of the Touristville bar scene is dangerously close to losing its trademark. The One Star Bar has long been proud of the lowest rating a bar could possibly have while still being allowed to operate. However, Today they received 'congratulations' that they had passed the two star average rating. The Owner and Manager, Virgil Bender, was devastated to hear this news, even though the rating only lasted for 0.4 seconds.
"We've always worked hard to make sure we don't damage our brand here. Do you think it's easy finding staff too forgetful and lazy to change the water in the sink? And getting that 'Drowned Corpse Vodka' from the Vory can be a fragging nightmare some days."

Virgil Bender took me on a tour of the bar, pointing out the features of his pride and joy.
"Now, I all these seats look passably comfortable, but I make sure to sharpen the springs weekly, or just remove them for a day or two, so nobody can work out a comfortable seat. Then there's [the firedoor]. I make sure that all the lights and everything works, but the door doesn't open wide enough for the skinniest of elves to get out, because of the building they built next door!"
He then proceeds to show me how he cut the water line so that the office amenities work, but none of the other taps or bathrooms have more than a faint dribble of pressure. "Just enough to pass regulations!" Mr. Bender informs me. "And the water floodin' [into the wood] makes for that perfect water bug cultivation, which gives [The One Star] such a unique aroma."
"Now, The AC. This is a wonder of engineerin' on my part, if I do say so myself. Seventeen years, I managed to keep this AC splutterin' right on the edge of dying, without actually working. But I realised that there's a few days in September where it actually becomes quite pleasant in here. So I replaced the AC. Made this'un myself. It works just fine, despite appearances. While it *seems* to be splutterin' and dying, all it's doing is moving bits. but in September, it starts pumping out 20 degrees Fahrenheit in here. Oh, and I got it plumbed so that it keeps the door puddle at the right level."

Mr. Bender has been running this bar for thirty four years (nearly twice the average lifespan of someone living permanently in the area), and the highest rating he'd ever suffered he referred to as "The 1.6 of '67", when he'd had to replace all his glassware after a barfight, so the vessels were uniformly clean for a single night. "Ever since then, I've made sure to have a double set of glassware in rotation, so I can replace a full set without anything lookin' too clean." Says Mr. Bender.
The One Star Bar has always been one of those excellent dives to make a shady deal or meet with a prospective employer, so Mr. Bender recently decided to branch out to cater for the rising number of Japanese patrons the bar was receiving. He now stocks lukewarm Sake, which he enthusiastically heats with a microwave that probably should have been replaced sometime before the turn of the millennium.

Now, In pursuit of how that tragic second star came into being, we delved into the P2.0 of the One Star Bar. We found an interesting trend of customers rating the place five stars with very poor reviews, mostly from touristy types. It seems that the One Star 'experience' was exactly what these tourists are after, and so they were rating it accordingly. We even found the incriminating 4-star review that tipped the establishment over the threshold of 2 stars:

★★★★☆ I couldn't be more disappointed with my visit, save for the fact that the AC dripped on everyone else entering or leaving the bar, but not me. Even the Sake tasted burnt!

So there you have it folks. The One Star Bar, currently at 1.9 stars, is dangerously close to that 2 star rating. So, if you get the terrible experience you were looking for, don't forget to rate the dump one star, before you go take a bath hot enough to sear your skin off.

The Professor, ShadeTruth Media. Stay safe out there.