Nothing is as it Seems

Nothing is as it Seems: A Story of Ares and Horizon 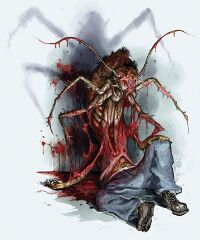 Is this what a KE Firewatch officer should look like?

I'm sure by now that all of you have heard about the Blake Island Firewatch Memorial explosion. According to Horizon, 'Criminal Agitators', suspected to be manipulated by the 'Bug Spirit Menace' bombed the memorial in insult to the men and women who died in the conflict with the bugs. Horizon then slapped a great big D-notice on anyone who said otherwise, and backed it up with defamation and bankrupting tactics. Knight Errant itself went and published an Internal Memo after this incident, and a few other incidents concerning Project Pyro facilities.

However. As is so often the case with Horizon, this was not the truth.
The truth is that the Ares Macrotechnology we knew, the Ares we bought our guns and armor from, is gone. Infected.
The Blake Island Firewatch Memorial was a joke. The Bug Spirits spitting in the eye of everyone who knew the truth. The truth that Firewatch lost.

So, let me tell you the true story.

It's the fifth of May, 2080. On this day, Ares Firewatch opened their Blake Island Firewatch Memorial, to gloat over those who had died in the conflict. At midday, they tridcast live the opening ceremony. But the mason hadn't reported the last minute touch up that had been done to the flagstones the night before. The reports of an intense gunfight nearby the previous night had been suppressed. So nobody was expecting it when, during the wreath-laying ceremony, the monument simply exploded in a spectacular cloud of fire and plascrete. The explosion killed a woman who had been laying a wreath at the time and threw the ceremony into utter chaos. The forensics team reported that a significant amount of epoxy explosive had been planted under the flagstones surrounding the monument and that epoxy had been triggered by a radio detonator, later found crushed amongst the stampeding crowd. No evidence had been found on the detonator remote. That's where the 'official' report ends. Those that were there, like myself, saw two more important things; A massive ARO casting the words "Remember Chicago. Down with Ares!" across the sky, and a number of grenades full of common insecticide, which while relatively harmless to the majority of the crowd, caused immense pain to some members of the Knight Errant honor guard.
It's not hard to draw a slightly different conclusion to the 'official' story here. The runner team, who I commend for their cleanliness, made a strong point before the feeds were cut. Ares was gone. The bugs had defeated them. We had to keep the fight up ourselves, or the Bugs would win entirely.

Now, There's one more important point about the Memorial Day Bombing. It's only mentioned as a footnote that there was a single casualty. Amalia Townsend was not the first, nor the last person scheduled to lay wreaths. So why had the the monument exploded at the exact moment she stepped up to the plate? I'll let you draw your own conclusions, as that is straying from the confirmed truth.

Now, I wrote this story on the day of the fifth, and had it ready for posting before KE had managed to clear the site of the explosion. However, Horizon had already issued a D-notice concerning any story that didn't conform to their ideal of the truth. This has happened before, but it's not common. Usually they just publicise their take on the story and drown out any other media.
So here I was with a story that my editor, Jules Harkon, refused to run. But it was in the host's archives, and Horizon was having none of that. First came the warning. Harkon quite clearly stated that no such article was going to be posted, and that Horizon should refrain from investigating our host. Then came the defamation. Horizon posted quite the scandal about Harkon, claiming that he was using blood magic to get his news. They had quite an impressive amount of convincing evidence too, considering the man had never awakened, and tends to faint at the sight of blood.
Then our accountants started noticing something odd. Our site was losing revenue. All advertisers had stopped renewing with us, our sponsors were drying up, and it looked like someone was embezzling our capital. Within a week, the site folded. Which is when our host was decommissioned, and the report I wrote became public domain in the Seattle Archival Host. Two days later, my car exploded when someone tried to steal it.

Now, I know I'm not writing news to anyone here. I'm done writing the news. I'm here to deliver you all the truth.

Retrieved from "https://shreloaded.net/index.php?title=Nothing_is_as_it_Seems&oldid=32325"
Category:
... more about "Nothing is as it Seems"
RDF feed
HasDate
August 27, 2080 +
HasMetaplot
Dance Around The Fire That We Once Believed - The Ex-Firewatch Story +
HasRelatedRun
A Shadowrun Based on The Paper Chase's You Will Never Take Us Alive 4 +
HasReporter
FirstOnTheScene +
NewsSource
ShadeTruth Media +