In the fallout of the events of 🎪 On The High Seas, Kani, Wolfheart, and Reverie set out with Long Beard Jackson to find him a crew to sail with him, so he won't be kidnapping any more people and forcing them into service. 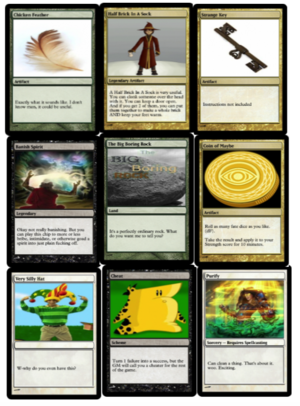 Magic generated from the deeds of Kani's last metaplaner run.

In Kani's Accidental Metaplane Vacation, Kani gained a series of poker chips from betting against another spirit. When she returned to the material world, she found these chips were still with her. Unbeknownst to her, they had some mystic link to her and upon reentering the metaplanes, they came along with her and evaporated into smoke, reforming in the hands of Kani, Wolfheart, and Reverie. They became 18 gold coins, which carried some special property and could be transformed into something else, or used to accomplish a specific goal.

The team had no idea how long they were at sea. Was it hours? Weeks? Days? Years? Nobody could be sure. But now a storm was brewing, and the captain was having difficulty controlling the ship with so few on his crew. He lost control of the ship, and they crashed into a reef. When the storm settled, the team resolved to head ashore and see if they could find men to join up. The captain stayed behind, in the hopes of repairing his ship.

With no real clue where to go, the team picked a direction and went thataway. They eventually met up with Chewtoy, a very annoying dog spirit who in spite of his best efforts was unhelpful in most cases. Usually because he doesn't got any haaaands (A fact he often reminded the team about.) He told the team of his master, who was captain of a ship and but was keelhauled and drowned. The team resolved to follow Chewtoy who himself decided to follow the team. After they walked in a circle the team convinced Chewtoy that he has to lead because they don't know the way.

The team ended up in a small Caribbean style town , and found a ship constructed well on dry land. They saw kids playing on the ship, and a man hanging by his ankle off the side of the boat. They went to talk to him, and he gargled as though he was under water. A little lifting to get him above water level and they could speak with him. Wolfheart figures out this is all caused by imagination, and imagined herself within the game of pretend. She found herself swimming in the open seas next to a boat filled with pirates. Wolfheart looked like she was treading water in mid air to the rest of the team. She convinced everyone else they needed to do the same, and the group boarded the ship in the imagination of the game, confronting the pirates who were really kids pretending.

One pirate challenged them, demanding proof that they really are pirates. It took some convincing, and a few uses of the special cards. Realizing that this was an imagination game and they could play pretend with some of their cards, a Very Silly Hat was produced, and a Chicken Feather was placed in it. They pretended this was a very fancy pirate had and that worked, actually. The Big Boring Rock was also produced, making-believe that it was a large jewel to prove that they have treasure as well. They were accepted and began to negotiate for the release of the Bosun. When this didn't look like it was going well, they changed tactics and goaded him on, using the Banish Spirit card to upset him enough that he quit the game and left. They then used their Strange Key to unlock the lock and let the Bosun down. He was brought back to the ship and began work repairing the boat.

The team returned to town, deciding they were going to try and recruit an "Unruly Horde". The first person they encountered was Archie, the strongest there ever was. He was putting on a show of how strong he was in town, and Kani made use of her Coin of Maybe to increase her strength to lift something to impress him. The team negotiated with Archie, convincing him that he should go on this grand adventure to gain new stories, and show others in other ports that he is stronger than the strongest they have. Archie agrees to come along.

The team then brings Archie to the tavern, where they intend to find the Unruly Horde to act as the crew. Wolfheart tells a tale of grand adventure and glorious riches and makes use of Trid Entertainment to push the point farther. They successfully recruit a bunch of crew, and bring them all back to the ship.

Long Beard Jackson is pleased, and says all he thinks he really needs now is a first mate. The team asks around from the crew and it is suggested that they try the former governor. The team returns to town and finds the former governor, drunk in an even more seedy tavern. They try and talk him into joining up, but when he refuses the team decides to Purify him, which cleans his clothes, sobers him up, and turns his drink into water. He also has the only clean glass in the entire establishment now. He's a lot easier to convince now, but the bartender is unwilling to let him ho until his tab has been paid. The team agrees to perform a job for the barkeep in exchange for the tab, and offers to go beat someone up to send a message that HIS debts need paid as well.

The team heads down there and finds a very angry blacksmith. He more or less tells the team to piss off, and a fight breaks out. The fight does not last very long, and the blacksmith is subdued by combining 2 Half Bricks In A Sock to clobber him over the head with a Whole Brick in Two Socks. They returned to claim the First Mate, and bring him back to the ship.

Long Beard Jackson was pleased, and upheld his end of the pact, returning the team to any port they wish. Unfortunately, there was nothing subtle about returning them to the port of Seattle. The dock officials lost their minds when a force 10 ghost ship emerged through an astral gateway, and HTR was immediately called. The team realized how bad this was and immediately absconded the fuck out of there, leaving Captain Long Beard Jackson and his crew to take care of themselves. The team fled and found places to hide until their vehicles made it up to where they were.

Wow, I've never gone this deep into the spirit world before! I'm not even sure where I ended up. There were ghost pirates, but I think some of them were just little kids. Were they the spirits of dead children playing pretend in the afterlife? Spirits pretending to be little children pretending? What was that dog, and why couldn't he have hands? I feel like I learned something, but I left the spirit world with more questions than when I entered. That sounds about right.