Team is hired to steal an experimental anti-grav device from a hidden EVO research lab.

The team meets the Johnson, and is quickly hired to steal either the plans, or the actual prototype itself. Mr. Johnson shares with the team that they may need access cards, and may need to steal an access card from one of the people who work there. Mr. Johnson offers the team some help, as they know the entire team will be at a specific party, and can offer passable forgeries for invitations. The team is advised to lift an access card from one of the EVO team, and use that to access the hidden research lab, which they would have to locate. Mr. Johnson also offers transportation to the CAS. This level of support from the Johnson makes it difficult to negotiate for additional pay. 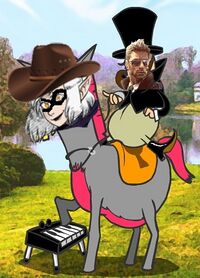 The team makes it to the party, and Trash Panda comes in dressed for the occasion, having taken some time to obtain appropriate attire, including a synthleather cowboy hat, and making sure to display her Nickel-plated Ruger Super Warhawk (stolen in Carmilla's Debutante), because Texas. Several people become very interested in her, and in order to avoid the need to dance with someone, she instead used her SpinRadical™ War Violin of the Apocalypse (Obtained as a prize in The Steps Are Paved With Good Intentions) to play some music for everyone. While this was happening, Night Claws and Wild Bull used the distraction to locate the decker support who was protecting the EVO team's matrix security. They located the decker in the bathroom, and after a brief confrontation and a door being kicked in, they knocked the decker unconscious. Night Claws accidentally triggered the deck's self-destruct when he reached to take it away, and Wild Bull had to dive on it to protect everyone.

With the matrix support gone, the majority of the EVO team decided it would be best to return to the lab. 2 members remained, who turned out to be a couple. They had taken an interest in this fascinating Elf, and were attempting to seduce her into joining them alone upstairs. As the husband laid it on to distract Trash Panda, the wife was getting a bit handsy. Taking advantage of this, Trash Panda pretended to reciprocate and use that as an excuse to try and locate the wife's card. She quickly realized the card must be inside the Wife's clutch, held tightly under her arm. With no hope of getting that without more drastic measures, Trash Panda shifted her attention to the husband, again using the same cover pretending to reciprocate the feelings and getting equally touchy. This worked in more ways than one. Trash Panda obtained his wallet, which contained his card and ¥2250, but also now the couple was convinced she was down for exactly what they had in mind, and were expecting Trash Panda to come and join them.

Realizing she did NOT think this plan through far enough, Trash Panda sent a distress call to the team begging for a rescue. Any sort of excuse to need to leave RIGHT NOW. Night Claws came up and started yelling at Trash Panda, acting like a possessive boyfriend who did not want his girl fooling around with another couple. Trash Panda was thoroughly embarrassed as all eyes turned to them to see the spectacle, and she no doubt became a laughing stock after leaving.

Unhindered by the hostile decker, Night Claws traced the EVO team's commlinks back to their lab, and lacking a car, the team had to hoof it. Literally. Trash Panda used the shapechange spell to turn herself into a horse for Night Claws to saddle up and ride. Wild Bull meanwhile used his skimmers, and the team made their way to the lab.

The lab looked like a dumpy little shack surrounded by security, and a ring of FAB to detect anything magical that walks up. Night Claws tried to access their host to mess with their security systems, but was smacked down by an AI. Trash Panda instead resolved to master thief her way in, casing an invisibility spell and a levitate spell to get inside the shack. After casting a Stealth spell on the elevator, she used the card to silently descend into the depths. 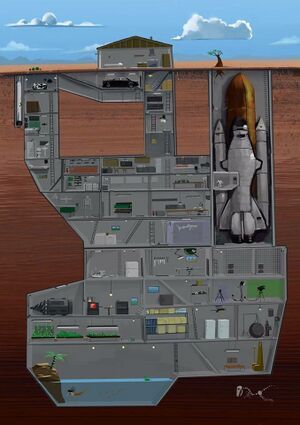 A map of the underground lab

Thus began Trash Panda's exploration of the lab. She found the core inside a garage, but realized this was not the entire devise, and as there was one of the EVO team inside talking to the AI within the core, she left to continue searching. Below, she would eventually find a human who had been experimented on, now resembling more of a chimera than anything else, having other animals grafted to their body. They were restrained, and in so much pain, begging Trash Panda to kill them. She did not, but instead offered to help, casting Shapechange on them to reduce them to a small dog, and stuffing them inside her duffle bag. She continued to explore, and located more parts to the prototype, stashing them inside the duffle as well. As she continued, she found a safe, but failed to get it open. Anti-tamper mechanisms triggered from a glitch, and the safe locked in a way that would require the manufacturer to reset. Trash Panda didn't have time for that, and used smart corrosives to open the safe, obtaining the plans for the device.

Deeper into the complex, she found a tiger who was in pain, and had a large amount of cyber-implants. She also found what she recognized to be a baby megalodon, and at the very bottom, she found a mermaid being held captive. Using her mindnet spell, she offered to rescue the mermaid, who had spotted Trash Panda through her astral sight. She quickly agreed to a similar rescue, and Trash Panda had a tortured "rat" and "dog" in her bag begging her to kill the bastards who hurt them so much. Trash Panda finally agreed, collecting a euthanasia drug from the medical lab, and sneaking up behind the director who was alone in his office at the bottom of the lab. Trash Panda set the syringe to auto-inject, disabling all safety features, and after sneaking up on him, jabbed it into his heart, killing the director instantly. On her way back up, she collected a helmet which appeared to be the one used by Neil Armstrong on the Apollo 11 mission. She then checked the tiger again, and realized the tiger was a shifter. Again, an offer for rescue was extended, and a shapechange spell was cast and they were stuffed into the duffle bag too. It was by this point getting a bit crowded in there, so Trash Panda removed a frag grenade and rolled it into a work area where most of the rest of the EVO science team was working. She then made her way back up to the garage, and waited until the mechanic got under the wheelless car. At this point, she unplugged the core, and released the hydraulic jacks holding the car up. Her rescued prisoners satisfied, she left the way she came and met up with a team very confused about her newfound animal collection.

The team traveled to the coordinates the Johnson gave them, and exchanged both the device and the plans for the cash and the trip back home. Mr. Johnson opted not to question the animal collection.

Trash Panda would begin to tire along the trip back, and eventually would need to use Long Haul to stay awake. She had to keep those spells going. Finally, after returning to Seattle, Trash Panda began to work on helping the rescued prisoners:

I really was not expecting that to turn into a rescue operation. It was crazy, but I couldn't just leave them there. At least everything went well. I really don't want to think about what sort of plans they had, or why they wanted to augment people the way they did in a space research facility, but the world is a better place without these drekheads.

I think the prisoners I rescued will be able to recover, eventually. But they may carry scars for the rest of their lives. The deep kind. T really hope they can find something to help them carry them.