Saint Nick hires a group of runners to make a cookie run... to New York.

Saul Goodman, some say the greatest baker in the land, has some of the most delicious pastries ever to tantalize the taste buds. Unfortunately, Skimmer brought these pastries to his some time boss Saint Nick, and now the big guy is thoroughly hooked. On Pastries. Now the jovial fellow is starting to jones, and the source of his culinary fixation is away to New York to compete on "Baker Wars" a new and highly successful competitive cooking show that endorses violence while cooking up tasty treats. Santa knows he's not gonna last long without his special cookies, so he's looking to employ some shadow runners to make a run, post haste.

After various shenanigans at their individual pads, the runners manage to all arrive outside Saint Nick's shop in Sohonomish. Invited inside, and cautioned that Saint Nick is definitely the real deal by Skimmer, the quartet stands before the big man himself, as he wrings his hands in consternation, clearly upset at something. The thing is, he's out of cookies. Fantastic cookies, special cookies, whatever you want to label them; only Saul Goodman can provide the stuff, and Saint Nick needs it yesterday. After a bit of wheeling and dealing, Saint Nick agrees to pay the team in either high quality KRIME merchandise, or if that won't do, 16,000 Nuyen. The Team agrees and steps outside to determine how they plan to get to New York and back with the (cookie) dough.

Frank and Cricket take one good look at Bayou Bill, and another, longer look at Gator, and decide they will ride together, without the presence of an angry reptile. Skimmer, being a good Christian offers Bill and Gator a ride, hoping they won't destroy to much of the back seat of his car. Heading to the border, Cricket manages to find a checkpoint that might be a tad easier to get through, despite the presence of a gator in one of the vehicles. Things go smoothly for all but Cricket, who is held for additional questioning briefly thanks to her burner SIN failing slightly to the scan. After a bit of back and forth, the SIN is scanned again, this time successfully, finally being allowed to pass.

Along the way heading to the Salishe-Sidhe border, a group of Go-Gangers pulls up alongside the vehicles, looking to cause some trouble. Frank simply flashes his spotlight at them, impersonating an unmarked KE patrol, while Skimmer shrugs and points at his back seat, where Gator smiles toothily, and Bayou Bill points his grenade launcher, also smiling. The gang decides to find easier fish to fry, but not before Cricket sends a sprite to glitch the lead biker's ride, causing him to run straight off the rail and over the cliff next to it. Frank just gives Cricket a long look, somehow knowing that the "decker" is responsible, despite not having a deck, just a commlink. Cricket just smiles and shrugs, happy with the results.

Stopping off for the night, Bayou Bill and Gator spend the night on top of the hotel, as they hate sleeping indoors. The night is fairly restful, and breakfast is had by all; Bill cooks up some bacon and sausage for him and Gator, while the rest hit up a local restaurant. The road trip continues without fault, until the next stop at the next appropriate place. This time, Skimmer convinces Bayou Bill to convert to Christianity, getting baptized in the small town church, at the promise that if he dies, both he and Gator will go to Heaven.

Finally arriving in New York, Cricket calls Saul, in the hopes of collecting the cookies and heading back to Seattle. Saul let's her know that he would be glad to help out, but is currently invested in Baker Wars, and his combat team is out for the count, having been poisoned the night before. The runner team agrees to fill in for Saul's missing team, and makes the necessary arrangements to meet Saul at the studio to compete.

Baker Wars begins with a bang, as Skimmer takes a shot at the Baked Mage, wounding him severely. Bayou Bill and the Baked Brawler square off, but much to the Brawler's dismay Bill is to much for him to handle. Frank basically finishes off the Brawler, by explaining to him that he probably doesn't want to die on a trid show. Cricket and her sprites easily handle the enemy decker, who is forcibly punted out of the Matrix by the Techno's massive data spike. Gator is there to greet the Baked Decker, chewing on his leg with a happy grin. The Mage's Air Spirit tries to take a swipe at Skimmer, but the agile elf is far to quick for it. The Baked Face rouses the crowd, getting them all hyped up for Amy's team. Saul and Amy get to the baking, each trying to out do the other before they get wasted. The combat is hot and fierce and all is going well until...

Bayou Bill puts his foot THROUGH the Baked Mage. Literally, through the mage. Shocked at this outright murder, the crowd boos, not at all impressed by the drug-addled swamp dweller, and we're not talking about Gator. After that it is a literal clean up, as the face surrenders outright, and Amy is talked out of competing by Frank's rather to the point dialogue. Unable to continue, Amy's team loses and Saul Goodman bakes the prize.

Saul congratulates the team, and offers to allow them to continue working for him as his prime combat team, but only if they go legit. The team declines, but graciously offers to help him out again in a time of need. Saul bakes a huge batch of Saint Nick's favorites, and then provides a flight back to Seattle in his private Jet, which presumably has room for two cars but somehow we all forgot to ask...

Saint Nick munches happily on his much appreciated bounty, and pays the runners accordingly.

"So working for Santa Claus definitely has it's perks; this time I got to go to New York on a cookie run! Met some really nice people, converted one to the true faith, and got to pet an alligator. Baker Wars was a lot of fun, but I still feel kind of bad for the poor guy Bill accidentally killed with his foot. And dragged around on his foot, not realizing he was sort of attached at that point. The Lord sure does work in mysterious ways, that's for sure. Maybe the Lord just hasn't figured out Bill's purpose yet. Only time will tell."

"I honestly have no idea what happened on this run; I think my brain just shut down and stopped questioning all the drek it was seeing. This was my second job for Saint Nick and honestly? Pretty solid as far as J's go. That gator guy was a fraggin' nut though. Anyway, run went well and I now know why Cuda does so much Kami. Stuff makes you feel amazing"

"Hoo boy! That run was more fun n' wrasslin' a greased gator on the docks! First me and gator met the real Santy Claus, then we went on a roadtrip, then we became Catholic! It was a good ol'time and that were before we got to the fightin'! That fool mage thought he could do his heeby-jeeby magic on me, I sure taught him a lesson! Just like kickin' paper! I need to brew me some more NoPaint-Moonshine though, I'm almost out of the stuff." 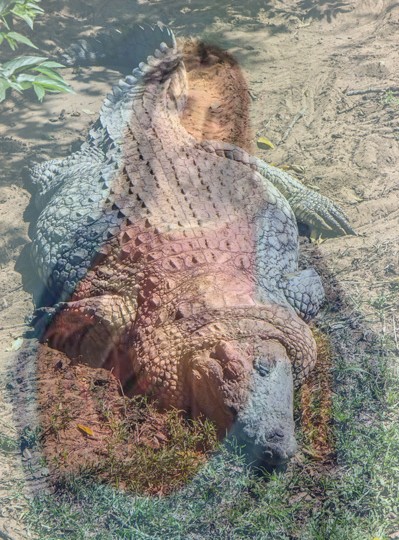 We got the song dueling banjos come to life, an elf who was dropped on their head, a chiphead crimelord, and the only sane one--a kid about 20 years old who seems to hate literally everything. At first it was tiring, and then I looked around and said "wait a minute, you might be onto something here" right about time Billy Banjo and his Gator convert to Catholicism. And then the SANE one also takes kami. Fraggin' perfect.

Dueling Gators decides to boot through someone's face on a live baking show broadcast as the elf leads a prayer for their soul...and all we had to do--all we had to do in the WORLD was pick up some cookies and drive home. If I'm bein' honest here, I'm startin' to think that maybe this ain't the place for ol' Frank.