Deceased: Beaten to Death by Officer Markus Kildear of Wolverine Security in a widely-broadcast incident.

An Orcish Underground street kid through and through. Bunny's a ganger kid loosely connected to the Skraacha. Everything she knows about life and magic she learned from the streets or from her dependant, "Granny". She's a mere wannabee runner. A tiny girl with big dreams. A gnome with a mission to make herself the biggest damn street wiz in the Orkish Underground. She aspires to ensure everyone knows her street name, even though, in her own words: "it's a dumb-ass name I'd never have picked in a slotting millennium."

Maxine grew up in the Underground, having lost both her parents during Crash 2.0 when she was still a baby, and being raised by her human great-grandmother, "Granny". For her earliest years, she prospered as part of an extended Dwarven community in the Underground, but when the Dwarves started pulling out, she was left behind in poverty. Her aging grandma did her best to raise her right, but every time an application was made to the supposedly supportive Dwarvish community for financial aid or help with relocating it was turned down on the grounds that neither Pippa (only Granny calls her Pippa) nor her grandmother were actually Dwarven.

Consequently, Bunny fell in with the local soup kitchens and the Skraacha from a very early age, cutting school (or what passed for it in the Underground) and running drugs while dressed in stupid Bunny themed kids clothing to throw off the cops. Never properly accepted by the Skraacha gang, she was at least seen as useful for her "cute" and "inoffensive" appearance that let her travel places no ork or troll ganger could ever venture. When she awakened, it was the Skrracha that put her in touch with Amelia Novak, who shares her Boar mentor spirit, and she feels a certain degree of indebtedness to the gang to this day. More so even that she does to Amelia herself, given their vastly different traditions and outlook on life.

Everything Max learned about Wicca, she learned from Granny. She's more than a little disconcerted about the "three-fold rule" and it's incompatibility with her life of crime, and fully expects the karmic debt she's accruing to get her killed one day. But until then, she plans on making it big, living it large, and showing those damned stuck-up dwarves that a gnome can be every bit as great as they can.

As she's gotten older, it's become harder and harder to hide that she's not actually a cute human junior-schooler, and much of the courier work has dried up. Now she's looking for her big break into the Shadows, looking to move up in the world, make a name for herself, and show those stuck up dwarves who rejected her what a gnome can really do.

Arcane Arrestor 2:As a gnome, Bunny has a hard time making even her own magic effect her person. This can come in handy in a pinch, when a hostile mage is targeting her with a spell. But for the most part, in it's a pain in her ass.

Mentor Spirit: Like many street kids, Bunny is fiercely territorial and protective of her home. This made her a natural fit for Boar, (it clearly had nothing to do with her being small and feisty and gutsy. Clearly.) who "manifested" to guide her through the trauma of the Awakening.

Shoot First, Dont Ask: Having had a wall blown apart by Halloweeners right before they came in shooting on her very first run, it's no surprise that little Bunny has learned to react to danger with maximum force. 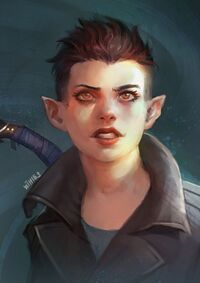 Dependent (Inconvenient): Granny is nearly ninety years old, and while she's still a relatively spry old thing, she needs her girl to take care of the shopping, the bills, chase off spiders and devil rats and to help her navigate the matrix. During the events of Bread and Cheese, it becomes apparent that Granny has uncannily good hearing, a slightly over-protective parenting style, and may very well be an Initiate Grade Awakened with levels of Masking.

Did you Just Call me Dumb: Bunny has gotten into the habit of insulting people in a deliberately innocent-sounding way. She relies on her "cute factor" to let her get away with it. Alas, now that she's older, she's no longer quite so cute, but she's yet to unlearn the habit. It's gonna get her put through a wall by an angry troll one day.

Gremlins: Maybe she's unlucky, or maybe it's her gnomish blood and awakened nature. Maybe it's all three. But whatever the cause, tech just does not like her.

Neoteny: Even in this awakened world, being 90 centimetres ("98 chummer! Get it right!") tall has it's disadvantages. On the upside, Bunny's clothing bill is as tiny as she is. On the downside, most people find a child-sized adult to be a little disconcerting at the best of times, and way too triggering of the "uncanny valley" reflex. Particularly when she starts to swear or ask for someone to pass the beer or drugs.

Prejudiced (Common, Outspoken): Bunny just can't bring herself to forgive the dwarves who fled the Orkish Underground and left herself and "Granny" in poverty. It didn't work out quite how she remembers it, of course, and it's not as though every dwarf (or even any dwarf) had an obligation to help them out. But try telling that to a kid who was raised being told that dwarves looked out for one another and never abandon kin, only to find out the hard way that she wasn't "part of the club".

SINner (UCAS): One of the dumbest things Bunny's parents ever did (in her street kid mind) was register her birth. Now she's stuck with a dumb-ass SIN and taxes she's gonna have to start paying. Some day. If she ever gets round to registering a fake line of legal work.

Although not an actual member of the Skraacha, Bunny is something of an associate of the gang. Her status is loosely defined as somewhere between "useful to have around" and "gang mascot".

Amelia is Bunny's "sort of" teacher and guide concerning the ways of Boar. Something of a tense relationship. Amelia provides Bunny with help and advice only begrudgingly from a sense of obligation to their shared Mentor Spirit. Due to their vastly different traditions, said advice isn't always helpful. Messner Vukotic helped Bunny and her Granny when no one else would. She's fiercely loyal to him, although that loyalty isn't reciprocated to the same extent. To Bunny, Vuk is a saviour. To Vuk, Bunny is just another street kid he tried (and failed) to save from the gang life. Crazy Otter is Bunny's go-to-guy for reagents. Just because she thinks it's funny that a Bunny buys this drekk from an Otter.

Bunny has a sort of "Rabid White Rabbit with Neon Pink" theme going on. There's almost always some sort of rabbit theme to her clothing, even if it's nothing more than a t-shirt under her armour jacket or a button pin somewhere on her person. She's smart enough to remove anything like that from her person before an actual run, though. So it's more a clothing shtick than an actual signature feature that could tie her to a particular run. 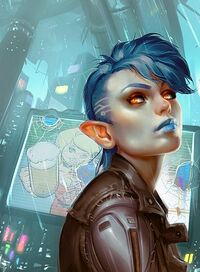 Bunny is a 98cm tall teenaged gnome with pixie-cut blue hair shaved close at the sides and bright orange eyes (not her natural colour). Given that she's a gnome rather than someone born with a medical condition that limits their growth, she's proportioned like any petite human woman. Her gnomish character is only really obvious when she's seen close up - when her oddly shaped ears are more noticeable- or when she's standing beside something or someone that lends the viewer a sense of scale. She carries herself with typical "street" attitude and swagger, and is prone to keeping her shoulders hunched, her hands in her pockets, and shifting her weight from foot to foot while she's bored or idling.

She carries a Beretta 201T, often worn on openly on her hip and upper thigh. The thing looks like a hand cannon when she holds it, but it's one of the few firearms she can actually use without breaking her wrist whenever she pulls the trigger.

A street kid through and through, Bunny's clothing tends to reflect Orkish Underground fashions. Lots of leather, obvious armoured plates, and spikey accessories. There's almost nothing about her other than her aura that suggests she's in the least bit awakened. She -is- unusually clean for for a ganger-affiliated street rat, however. Granny would have a fit and die if Bunny ever left the house looking anything other than her very best. Even though she hates her street name, she's embraced it and made it her own. There's almost always an element of "pink and white fluffy bunny" in her clothing somewhere, usually with a hint of the rabid about it, even if it's just a button pin on her jacket. She's much too street-aware to allude to such things as her street name when on a run however, and so doesn't stick to theme consistently enough for it to become a signature quality.

Herself, wearing a pink rabbit-themed Halloween costume/mascot costume and carrying a pink bunny rabbit. The white patch on her chest bears the legend "Go Slot Yourself" orbiting a disembodied hand giving the viewer it's middle finger. The bunny rabbit in her arms is mangy, rabid, and frothing at the mouth. The effect is somewhat spoiled by it's patchy resolution and slow jerky movements. An artefact of her poor quality commlink and the simple fact that tech hates her.