A former British Army CBRNE sergeant, Gardnerian Wiccan priestess, and ex-runner from Central London, HAZMATilda was hired by Crazy Otter to help him with his FAB III contamination issues. She originally went by her craft name, Matilda, but picked up her current moniker while running in London thanks to her obnoxious yellow anti-Cs. Immediately after arriving in Seattle, she opened Waltzing Matilda's Magical Wares, a talismonger's shop in Snohomish. Without much reputation or contacts in the area to drive business, it slowly began to fail until she sold it off to Indus during the events of Capitalism Ho! While working as a manager of a Crime Mall shop isn't exactly the best retirement plan, she's a long ways from all of the problems she caused across the pond and is currently quite at home with the chaos of Seattle.

Between the gas mask, the CBRNE suit, and her cockney accent, HAZMATilda can be rather difficult to understand at times. Both her and her familiar are always in their signature yellow anti-Cs until she can get to a safe, clean place to go through her decontamination procedures. She's highly methodical and careful in all aspects in her life, but her rough manner of speaking and quick temper don't exactly convey her high level of intelligence and thoughtfulness very well. 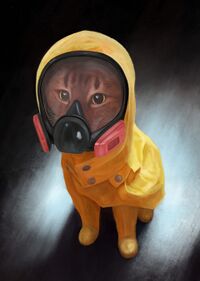 Her signature HAZcat is both her familiar and her baby. Actual name Gamma, HAZcat is bizarrely comfortable in her custom fabricated CBRNE gear and quite careful not to stray too far from Matilda while she's working.