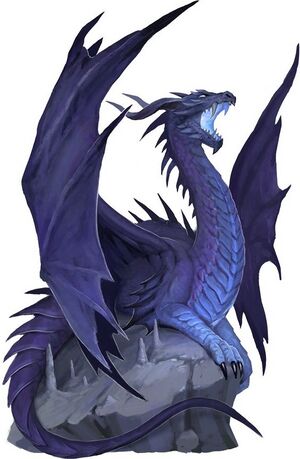 Marika is one of those drakes 'lucky' enough to be born into Lofwyr's ownership. From birth she was molded and trained to be the perfect agent of his will. While trained relentlessly in countless disciplines, the most important lesson that she was taught was deceptively simple. Her place.

Drakes were created to exist as servitors for dragons, free from the terror of a meaningless existence. Gifted with life, she only had to pay with the honor of serving her masters, beings fundamentally greater than her. More perfect, with vision and might beyond her ability fathom. By serving the small role of her life, she would help bring about a greater world.

The lessons ran deep, and Marika dedicated everything to advancing herself, and through that the will of Lofwyr. Over time, she distinguished herself, rising through the complicated internal hierarchy of Saeder-Krupp's drakes, her power and zeal driving her to ever further heights.

Eventually, she found herself working with dragons increasingly often. At first, every encounter was wonderous, a chance to see and learn from those she venerated almost as gods. As time passed though, a thought started to worm through her mind, a treacherous line that she fought and pushed down, yet each time came back a little stronger.

"They aren't better than me."

Far from matching the presence of Lofwyr, whom she had seen on treasured occasions, many of the dragons she worked with and often under, were... lesser. While these dragons were generally competent and at times wise, incidents grew where she surpassed their work, her magical power and drive exceeding those she idolized. With their lesser performances, they were rewarded with power and wealth. Marika's treatment in contrast, varied between the status of a cherished working dog, and that of a tool little better than a slave. As the contradictions grew, the ideals she followed started to chip. A new emotion, resentment, started to follow.

The station she had blindly accepted in life, the degrading tasks, the groveling, the submission and lack of respect. It all started to gall. The life she lived, once everything to her, had now become hollow. But now the question is, what else is there? What else can she be?