A Horizon Johnson wanted help for his friend, Ian Hawke. A Horizon producer/director best known for 'art film' rather than the highly popular commercial offerings. Ian was staging a production of Moulin Rouge - a fifth world musical. SpinGlobal was planning to disrupt it.

The runners needed to assess and improve on-site security. And then defend against the incoming threats.

They succeeded and got paid.

Ian Hawke had transformed an area as large as a city block downtown into a set for Moulin Rogue. There was a red windmill. A full sized elephant. A cabaret hall. It was a security nightmare. Lots of areas hidden from sight. Poor cyber security. No magic security.

The Johnson was wearing an all white suit, sitting in the soybucks on the first floor of Horizon's downtown offices. He explained the job.

It sounded pretty straight forward. The worst part was meeting the producer/director at 7 am in the morning the next day. That was awfully early for several of the runners.

Twitch researched the producer/director and the set location.

Usagi purchased cameras that Twitch could rig up to address all the gaps in the security video footage.

The runners planned to meet with the producer/director and his security people, and plan from there.

Twitch drove the team in Baby, so they arrived in style.

However, they soon learned that the producer/director needed everyone in period clothing, suitable to the production and film. Even his crew had to wear costumes. Usagi and Henry Explicit shrugged into 19th century clothes over and under their armor. Moth dressed as a cabaret dancer.

Sure enough, an attack came. SpinGlobal sent rollerblading thugs with razor-wire yoyos. And paint guns. They wrecked some of the cameras and props with the paint guns before attacking the folks on patrol.

Usagi fought off the thugs near him, dealing an overwhelming amount of damage.

Henry Explicit relied on flash bang grenades and took out two as well.

Twitch shut down an attacking decker very quickly, and was able to focus on providing 'I am the Firewall' protection to the others, and help from his combat drone. He helped Moth. She inspired the team, while the drone took down one attacker, and she was eventually able to shoot the other.

The threat was ended.

But props were destroyed and a dancer injured, twisting an ankle fleeing the trouble.

Everyone worked together into the night repairing the props, and Moth stepped in and filled in for the injured dancing. The show must go on!

The clients were happy, and they all got paid.

They interrogated the prisoners and found that a producer of popular commercial films at Horizon was working with SpinGlobal and behind the attack. This information was certainly important to share to their Johnson also.

And Moth, undisguised, is now in the official movie of the production. 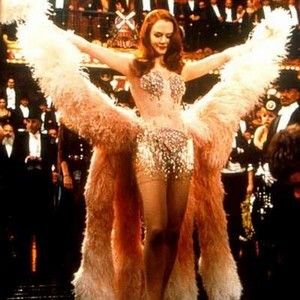 Well, I got to enjoy being a Spider for a minute. Probably about literally that long. The decker who came in was a joke and it took me all of about a second to shut him down (and I'm nowhere near the best hacker we got on the Haven!). I was hoping to bend the IC in the host to my will! Alas, 'twas not to be (sorry, the bad dialogue in the show rubbed off on me). Anyway, I'm really glad it turned out alright, and we made sure that everyone got out without a scratch!

Working with competent Matrix support is helpful. We managed to get a security network up with nothing more than a dozen metalinks. I will say scrapping with SpinGlobal is...strange. It felt like they were planning to make a drive-by on roller blades to just mess up the sets and the cast, and didn't expect to run into actual opposition. A perfect example of Style over Substance.

Moth here. This was my 15th run. This was a good team. Everyone was very good at their job.

I do love musicals. I can't believe I ended up getting to dress as a cabaret dancer from the Moulin Rouge! And that I'm in the movie now! I can't wait to see it when it comes out. And I got to keep the outfit!

I particularly appreciated that Twitch was looking out for me. I think he really saved me with that 'I am the Firewall' and his drone racing over to help me.

Everyone on this team has heard my wake-up songs, since we had to wake up so early for the 7 am start. All my songs about lovely days, and waking up, and sunshine.

I am also particularly excited that my chocolate cake 2.0 turned out so well at the after-party.

I can't wait to show Dandy! The outfit and the cake.