Put a Ring on It

Rambozo wanted an engagement ring for Tanuki. A traveling exhibit of beautiful rings of great value and historical significance was at the Seattle Asian Art Museum.

Ramby assembled a team of runners to help him steal the rings, so he could choose one to give Tanuki. He asked the team to frame the Triad for the crime.

Kani also wanted a stone for her engagement ring for Deimos. Moth wanted gold jewelry for her papa King Midas who collects all things gold. Ramby had already planned to ask Midas to help fence the rest of the treasures, knowing he would pay the runners for the pieces they did not want to keep.

The Triad and the Yakuza had just made a treaty, agreeing to a neutral stance around the sale of Tempo, which had let to so much war in the past. The treaty had including letting some lower ranking members take the fall for the greatest violence during the war. These lower ranking members were likely agitated, and looking for a way to disrupt that peace.

The display of jewelry included pieces of important to the Japan Imperial State and others on loan from Lofywr.

Rambozo invited the runners to meet at his shack in Puyallup, to make the plan. They needed to steal the rings. And blame the Triad. This would likely take a trid-quality heist. Or a very violent smash and grab. The group considered all possible options.

Couronne confirmed that the host was highly secure - difficult to directly hack. She initially was able to provide the floorplan from matrix searching. Trash Panda scouted with astral projection and found two F6 spirits, and traced them back to a summoner at a secure hotel room, some distance away. Moth scouted in person during hours when the museum was open, and seduced a docent who gave her access to the employee restricted area and his password. With the password access, Couronne retrieved more information, including the guard rotation.

Key points were that security was heightened, and there was a corporate HTR team providing the security at night. There was a fifteen minute window after the museum closed before the evening shift was fully in place where it might be possible, but quite challenging. Up to 14 guards coming on and off shifts. 2 F6 spirits. Potential KE response. Moth suggested considering if there was a way to swap out the jewelry with fakes long enough to get out clean. Trash Panda had a forger contact, Daniel Lufe, who could make forged replicas very quickly. Couronne helped confirm that there was a cleaning rotation for the jewelry where the two cases were taken to the assistant curator once per day. The assistant curator was not well guarded at all.

Ultimately, the plan was for Kani to black bag kidnap the assistant curator in a Triad disguise, while Moth impersonated him. Trash Panda had a spell that would give Moth the same aura as the assistant curator to also fool the F6 spirits. Moth would make the swap, walk out with the jewels, and drive away.

Kani kicked down the door of the assistant curator's house, and intimidated him into immediate surrender, and put him in the trunk of her vehicle. He could clearly see her tried disguise. Moth slipped into the house, and finished her disguise as him, using his own clothes. She intercepted a KE investigator, summoned by neighbors who had heard the noise of the door being kicked in, and successfully impersonated him and conned the detective into believing that the curator had been inspecting a grenade relic which had proved to still have live ammunition and exploded.

Moth reported for work as the assistant curator, and made it through the day until the afternoon when the cases were delivered to his office, with more impersonation and fast talk. She successfully swapped out the jewelry, and had the real jewelry in his briefcase to carry out. Unfortunately one of the F6 spirits saw through the aura spell as Moth was making her way towards the exit. She realized as she got to her car and was pulling away that KE cars were pouring into the parking lot, and might give chase to anyone exiting. Couronne took over Moth's car and got her stealthily to a parking garage where her car could hide among many. She was able to slip out undetected.

Kani drew KE away from searching for Moth's car by pulling out in front of the KE pursuers - in the Triad disguise - and pushing the black-bagged curator out of her moving car. One KE car pulled off to help the scratched up (but otherwise uninjured) assistant curator. Two cars remained in pursuit of Kani. She successfully disabled them both with shots, and kept driving. These KE officers saw her Triad disguise in the process. Kani got away.

Both mission objectives were achieved.

Rambozo picked the ring he wanted. Kani picked the stone she wanted. Moth gave her papa a collection of gold rings. King Midas bought all the remaining treasures, compensating the runners for their efforts.

Because they had succeeded also on the Triad frame, Rambozo provided a bonus of an aztechnology striker each to Moth, Couronne, and Trash Panda.

Saeder-Krupp handled the theft so smoothly, it was almost as if they had been hoping it would happen.

For Trash Panda and Couronne: 20,000 nuyen, 6 karma +2 CDP, and 1 aztechnology striker w/ internal smartgun and explosive self destruct with choice of frag or incendiary rocket For Trash Panda only: +1 chip to Daniel

For Moth: 10,000 nuyen, +1 loyalty for King Midas (converting RVP into CDP and spending it), 6 karma, +2 CDP, and 1 aztechnology striker w/ internal smartgun and explosive self destruct with choice of frag or incendiary rocket 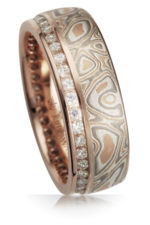 Moth here. This was my 21st run. It was great to have a chance to help Ramby. I'm so happy for him and Tanuki! And for Kani and Dei. Ah, it's all so romantic. This was an interesting case where we considered several options for how to do it. Ultimately, the team went with a fairly subtle approach, taking advantage of my social infiltration/impersonation skills. I was really glad to help! I'm so happy there was no damage to the museum. And I got to give my papa a treasure of gold! Which is the thing he loves most in the world! And he definitely smiled at me for it. I didn't keep a ring for myself. But I did end up with a wonderful present for my sweetheart. He likes guns. He will surely like this aztechnology striker!

"I am so glad that I got to help both Ramby and Kani to pick out rings for their loved ones! I was delightfully surprised that we were able to pull it off with such little collateral damage, though I am sure that Ramby was especially disappointed in that. He did a great job juggling those live grenades while he was waiting for something to do!"