Tanuki, as he calls himself, is a rigger that seems to interact with the outside world jacked into his drones. The few things others have gotten from him are the following: human, male in his late teens to early twenties, living in Seattle--either unable or unwilling to leave the place where he lives except jacked into one of his drones.

When he is forced to leave, he is dressed in a Urban Explorer Jumpsuit, with a helmet shaped like a smiling racoon dog face.

Character spoilers past this point.

In order of importance to him:

Roughly 18 years ago, a pair of lawyers fighting for metahumans in Japan were 'encouraged' from a number of sources, including the Imperial government and the local Yakuza gangs, to leave the country..Since she was heavily pregnant with their son, they did flee; to Seattle and the UCAS, hopefully to continue their fight for the right of all metahumans, and raise their child in a safe place.

Born in Seattle to two metahuman rights lawyers, Tanuki, was always the sickly, small, child of his peers. He was always seemingly sick; and forced, eventually, a very young age to remain home once it was realized he had a severe, incurable sunlight allergy. Things became difficult for the family when Toshi's father. Hiro, was killed by the local Triad when he was working with the courts for ork rights in the slums, where the Triad had been ensuring the 'protection' of the area. Tanuki was 7. Soon after, Tanuki's mother dropped the case against the Triad responsible for her husband's death, fearing for her son's life in continued retribution with the syndicate. She never told her son that she knew very well what happened the night her husband did not come home. It was an easy thing to hide; for most of the day, the boy was left inside, only able to interact with people outside of the Matrix when they would come over; usually his parent's clients over the years. It gave Tanuki a rather balanced view on metahumanity, and also an interest in various languages out of boredom.

Over a year ago, with the help of his best friend, a troll with the runner name Boned, he, in the dead of night and very carefully, moved out of his mother's house; knowing that if he didn't leave he never would, and having found out, from some research about one of the Seattle Triads killing his father. Since then, he and Boned have more or less operated in the area--getting jobs, maintaining their lifestyles and in general, done whatever it takes to remain competitive. Eventually, Tanuki got well enough known and well connected enough to get on the Haven.

He currently lives above Al's Garage in Bellevue with one of his boyfriends; Rambozo, because there is always an Al's Garage everywhere you want to be. Under his fake SIN, Brian Chin, he currently coordinates the motor pool for Solace.

Allergy: Sunlight (Severe): Due to purchasing the Allergen Tolerance geneware mod (three times), he is no longer allergic--however the allergy is still on his sheet.

Distinctive Style: all of his drones/vehicles have body modifications to look like his runner namesake.

Fame Local: After a music trideo, Tanuki finds himself getting more and more recognized a lot of different folks in Seattle.

As mentioned, the drones he uses to interact are either anthro or four legged tanuki, and also his vehicles having an external striped paint job based on the raccoon dog; and also the insides of the vehicle.

If Tanuki is ever seen in meat space, he is a five foot tall pale Japanese-American boy who favors blue jearns, t-shirts and has his black hair out to a shoulder length, with brown eyes, or in his Urban Explorer jumpsuit, greys and browns in a tanuki pattern, with the tanuki looking faced helmet. He's reluctant to take the helmet off, even indoors--mostly because of his allergy.

However, he is generally jacked into one of his drones (his Doberman being his favorite), which are standard drones with a modification to give them the look of his name sake: raccoon dog antromorphic (or large raccoon dogs, depending on the drone) animal traits.

Jeans, t-shirt, sneakers--if he has to go out, generally a large wide brimmed hat and his armored coat finish out the remainder of the outfit. 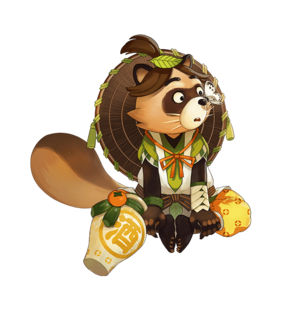