"A Mage fights with all manner of eldritch power at their beck and call. A Mystic Adept is another take on this, utilizing similar methods. Even Adepts imbue themselves with magical strength. I have an edge on all of this. My gifts are just as great, if not greater, because they have taught me that only by my iron will may I survive. I do not depend on spirits, or spells, or magical powers, to fight my battles.

My strength is my own."

Hatano is an accomplished swordswoman from Neo-Tokyo. She is also a Dreamwalker. Her specialties involve fighting astral entities, and socializing at high-class events. She has always had a knack for dealing with people, and has great natural charisma. She views adepts, mystic adepts, and mages with some disdain and disrespect. She thinks they cheat to get ahead in life. She understands that her fellow Shadowrunners will have these gifts, and that she must show them professional curtesy. But that doesn't change how she feels deep inside.

Hatano always seeks to become stronger. Both of body and spirit.

- She has researched what she can of the metaplanes, but now wishes to see them. She has learned that those with her particular gifts often spend a lot of time there. (Initiate)

- She wants to Learn more about Western society. She needs to have more experience dealing with people other than Yakuza members. (improve her face skills)

- Hatono studied at the school of Tenshin Shōden Katori Shintō-ryū. She learned her swordsmanship at the feet of the masters. But there is always room for improvement, and she strives for it. (Improve her Blades skill)

- Hatano has excellent training with a sword, but has always been a poor shot. She wants to practice and raise up her shooting skills. (Improve the Pistols Skill)

- Hatano will never be a standing member of the Mita-gumi, but she still seeks to honor them. Her father earned great respect, and that legacy was passed down to her. She seeks to gain better standing rep with the Clan. (Gain positive Yakuza rep with the Watada-Rendo Alliance)

Hatano Mori was born in Neo-Tokyo to a Lieutenant of the Mita-gumi. Her father, the ruthless Ichijo Mori, was a member of great standing in the Clan. She was afforded many luxuries in life. Growing up as the only child of a Yakuza Lieutenant was very good for her. She went to the best schools, had the best things, was afforded the best opportunities. She knew that she would never take a role like her father's, but that didn't stop her from becoming an expert swordswoman. She learned her ways around the social structures of the criminal world, as well. By the time she was 20, she could out work, out think, and out fight almost all of her father's underlings.

Because of her father's standing, being an elf was not a hinderance. True, it would have been near impossible for an elf to reach the position her father was at, but that was not her destiny.

When she was a child, she began to experience her awakening. It was more subtle due to the nature of her powers. She began to feel things when people were around. Objects, too. It was very small at first, and slowly developed. She couldn't control it, and never brought it up to her father.

When she was 22, her father was killed. He insulted the boss of a smaller clan, and they ambushed and killed him. They believed the structure and order of the Watada-rendo alliance would keep them safe. That the insult paid to their Oyabun was settled by the death of Ichijo. Hatano had other plans.

The next few days earned her the nickname "The Demon Mori". She, along with some of her father's closer friends, took vengeance into their own hands. The smaller clan was decimated. Their legacy was completely removed by a single woman's vengeance. It was during this time that her powers as a Dreamwalker fully emerged. Emotions are very powerful. They can bring out the best, or the worst in people. For Hatano it was the latter. The Clan she was fighting had a single mage. They killed many of Hatano's friends. As the mage and Hatano fought she realized she might lose. Through sheer force of will, she called upon her body and spirit to cut this man down. That was the first time she used Astral Combat, effectively destroying the mage's spirit. What she did not know was that when she summoned her own power, a great spirit also gave her a sliver of their power. She would learn this later when she formally meets the Stag.

Knowing that she could not stay in Tokyo after that, she travelled to America to become a soldier of fortune. She made a good name for herself. She also developed her awakened skills during this time. She learned from others that what she felt was an effect of magic, and she learned about astral projection and the astral plane. Her raw power was tempered into precise skills. But she knew she wasn't a mage. Or an adept. She still very much relied on her own strength of body and will, not magical help, to succeed.

Almost immediately after leaving Tokyo she was contacted by two VERY important associates of her father. The first was a well known individual, Asahiro Kunitoshi. He was a contact of her father's connected to Shiawase. The second was less known. Black Paladin is an alias to a very professional, very lethal bounty hunter. Her father made contact with him years ago, and now he has reached out to his daughter.

Recently, she has been posting on the Shadowhaven BBS, trying to step her feet into the world of Shadowrunning. Hatano still maintains friendly relations with most members of the Mita-gumi. Although she was forced to leave, many members silently supported the revenge she took. It was something no standing member could have organized. She took full responsibility and earned everlasting respect from those who knew Ichijo, which is most members.

Seer - Hatano is a Seer.

Explorer - Hatano is an awakened Explorer. Unlike some, she doesn't view the astral plane as a place to explore so much as an an avenue to defeat her enemies.

Lightning Reflexes - Hatano was born with reflexes like lightening.

Mentor Spirit - Stag - Hatano learned of mentor spirits when she was learning of other things in America. She always felt a connection to something greater, especially after the night of her vengeance. It is soon after this she met the Stag. She learned that they embodied everything she holds dear, and chose to follow its ways in return for its strength.

SINner - Imperial Japanese State - A gift from her privileged upbringing.

Distinctive Style - A Beautiful Swordswoman who carries herself with the air of a Yakuza boss. Her dress is also always heavily influenced by Japan. Hatano also carries her sword with her everywhere she goes. This is a common custom in Neo-Tokyo, but may not be accepted in all Western establishments.

Code of Honor - Path of the Samurai - Honor, for all.

Did You Just Call Me Dumb? - Hatano is still used to having quite a bit of influence. She isn't used to people talking back to her and not getting her way.

Poor Self Control (Vindictive) - Her privileged upbringing left some old habits she can't seem to grow out of. She has a hard time handling insults.

Hatano possesses tattoos that cover her back, legs, and both arms. This is a tradition in the Yakuza, and she took the ideals from her Clan.

Her armor and clothes is always heavily influenced by traditional Japanese styles.

Her custom Sleeping Tiger is a special order piece from Vashon Island. It is a grey and white kimono that blends traditional looks with modern functions. It was acquired through Asahiro Kunitoshi as a gift, with "Surely no strings attached...".

Her FBA is also similarly styled.

A red figure with Oni horns and fangs, carrying a sheathed sword. 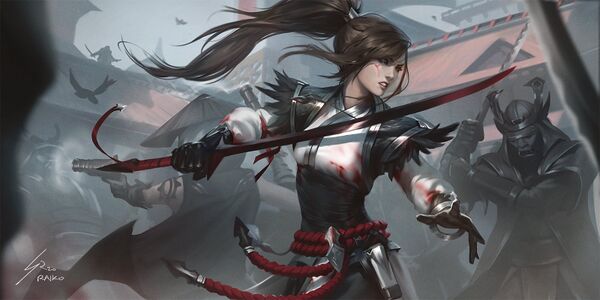