Macahuitl and Hack Skellington aren't the biggest names in the Halloweeners. They don't know Nightmare, they don't lead any raids - they're the sort of ground-pounders the Halloweeners are primarily made up of, and they're not particularly ambitious about moving up in the world. These two are satisfied with a life of violence, indulgence, and bromance, and that's that. Between Mack's overwhelming brawn and plasteel macahuitl, and Hack's Matrix skills, the two almost make one entirely functional badass for the gang. 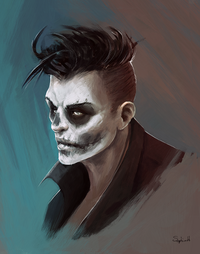 Mack is a troll of Aztlaner descent that's pushing a full nine and a half feet tall. He's known for wearing an Aztec-ish headdress and similarly colored armor jacket whenever possible, as well as the huge macahuitl that serves as the origin for his street name. He might not be very bright, but he's definitely buff enough to make up for it, usually.

Hack is a worryingly thin, remarkably short, and interminably greasy elf. He's never without three things: His deck, a Hermes Chariot he lovingly refers to as 'Daredevil', full skull facepaint, and at least five doses of Novacoke. He speaks in a squeaky, high tone whenever someone intimidates him, which most people do, especially if his best bud isn't around to scare them off.