Ryōma (Riyo-Ohma) is a aloof, stand-offish Japanese human. As a Shadowrunner, he takes pride in his swordmanship and is driven to accomplish the mission. Much like most stereotypical Samurai, he lives to improve his skills in physical combat, though he makes an effort to try to contribute to things other than slicing drek up.

As a Burnout Adept, he wields his Katana for up-close combat, but carries Automatic Weapons like his Remington Suppressor and Yamamha Raiden when he needs to take out enemies from afar. He is also quite knowledgable about the local Shotozumi-gumi Yakuza and other crime syndicates... maybe a little too much.

In his free time, he enjoys practicing his English, casually smoking and drinking at bars, as well as taking joyrides on his Harley Motorcycle.

On a short term

On a long term

After unknowingly assaulting Yamaguchi-gumi Kumi-In foot soldiers, the Shinra-Gumi and Ryōma's neighborhood was beset by the Watada-Rengo, sending a number of his classmates and his father's underlings to the hospital. In order to ensure the safety of his clan and his community, Ryuuzaki went to the Watada-Rengo to commit Seppuku whilst smuggling Ryōma away to Seattle.

But the guilt of his mistakes continued to weigh on Ryōma's shoulders, forcing him to seek a new outlook on life. Rather than live a (mostly) peaceful life under a new identity, Ryōma began his career as a Shadowrunner, resolved to gain influence and networks to protect innocents from the criminal injustice from within the Yakuza syndicate. 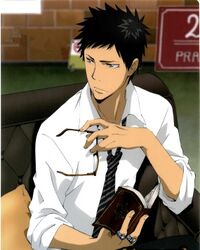 Clothes-wise, Ryōma dresses in a more stylish fashion, whether it be wearing a Japanese delinquent-esque Sukajan bomber jacket, leather jacket with jeans, or a slim-fit suit. From a glance, he clearly appears and acts like a stereotypical Yak, but when he is not on the job or in public, he generally likes to wear in light, casual street clothes. 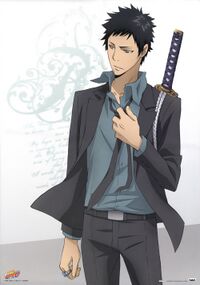 Even while wearing his casual wear, Ryōma appears intimidating at first glance. His aloof behavior and sharp eyes doesn't help with that either.

A suit-wearing Ryōma with Deer antlers.