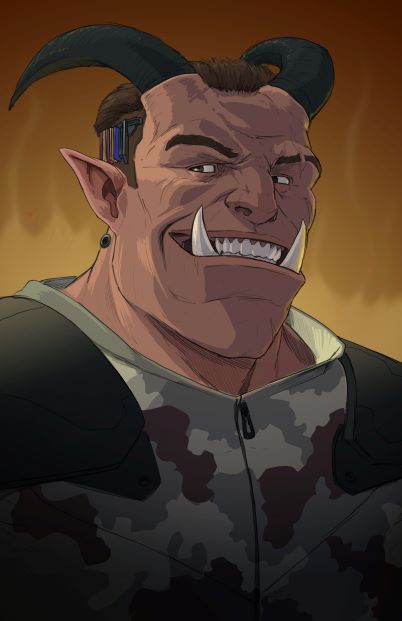 Kilbo is first and foremost a soak tank, which is why I put Meatwall as his roll. He sticks his head in first, and takes bullets for everyone else. He can also hit people really, really hard with a variety of unarmed weapons (str 14). This also means he can perform feats of strength as needed. However since his natural skill set is rather limited he's augmented it with a skilljack and skillwires, which he has a skillsoft subscription for. So he can perform a variety of other tasks to a competent level, as long as the linked attribute isn't Charisma (2), and preferably isn't logic (3)

Kilbo was born to parents who didn't care for him much. Even less so when he goblinized at an incredibly young age. As prominent humanis members they couldn't let the situation stand, so they used their connections to 'fix' it. They sold him in secret to Aztechnology for research purposes, without anyone ever realizing he was a troll. Thus he disappeared from the world without a trace.

The azzies used this oppurtunity to research high level integrated biotechnology. The goal was to create fearsome and powerful troll soldiers that could be augmented past the usual bounds while retaining autonomy in a way cyberzombies do not. Thus Kilbo was subjected to all sort of experimentation from his earliest memories throughout his entire life.

He was trained to fight and to obey, and it was all he knew. However the azzies underestimated the weapon they had created. As he aged he slowly grew to resent his captors, but he was far more clever then they realized and he kept this growing hatred secret.

One day during a field exercise, that had become semi-routine he made his move. The azzies beleived him a duitiful soldier/subservient as he always followed orders without question. Due to an emergency situation his gaurd and handlers were lighter then usual. As such he was able to handily dispatch them and disappear into the night.

Now he does the only thing he can do, run the shadows. The Azzies would love to have him oback (Wanted quality) and he enjoys nothing more then putting their minions into the ground(Vendetta). Moreover, there isn't much else he's good at.

He won't walk away from a fight.

He's a bit messed up in the head from his life and all the experimentation done on him.

He escaped from an Aztechnology research program, hence the Prototype Transhuman quality. They would love to have him back, and he pretty much hates their guts, hence the Wanted and Vendetta qualities.

There's nothing particularly associated with his handle but vague rumors of a hulking troll who's walked into and away from more fights then is likely considered healthy.

Shadow Community knowledge combined with a matrix search will likely turn up a rather disturbing video a hulking troll that many would say is Kilbo, though it can't be said for sure. It depicts him/it in first person originally jumping into a smoke filled cavern with very little concern, shield in one massive hand and spurs protruding from the other. The figure proceeds down a decently long tunnel until the view opens up into a larger chamber. The bodies of a number of hounds of some sort litter the floor, and in the center there is a disfigured creature passed out. The figure approaches the creature which is an obvious Nosferatu for those in the know. The figure chuckles and turns the creature over with one of his large boots. In a quick motion the figure drives his spurs through the creatures head, with little effort. Then all hell breaks loose.

When the figure flings the now dead Nosferatu from its spurs and across the chamber blood streams from the corpse's wounds in a disturbing fashion and a massive blood spirit coalesces on top of the corpse. It charges the figure whose eye's you are viewing the scene through, and the video cuts out for a second. It cuts back in and you're clearly in the same room but viewing the scene from a new perspective. A hulking troll fully decked out in armor wielding the same shield and spurs is going toe to toe with a massive blood spirit. Disturbingly, as if the scene needed anymore, the troll seems completely unafraid and is laughing maniacally as it tanks blows from the the claws of the spirit and returns as good as he gets with his spurs. This goes on for a moment as other blurred out figures enter the fray and are completely ignored as the duo face off. Suddenly, a bright light shines from the tunnel and a dwarf on a motorcycle shoots out of the smoke and rams directly into the spirit that the troll was keeping busy. In an instant its splattered across the chamber and the only sound left is from the motorcycle. Then the video ends.

He is a 2.7m (almost 9ft), 330kg (728lbs) wall of muscle and fists. He has whitish red skin, very large horns, tusks, brown hair and eyes. He is the definition of huge muscular troll.