Black Rose, or 'Rose' to those that can't be bothered saying the whole thing, is a cat-burglar. However, she's both capable and enthusiastic about employing her troll muscles and durability to get a job done.

There are two types of thief; those who steal to enrich their lives, and those that steal to define their lives.

Rose, being a bit of a heist junkie, is always looking for The Job. The big one. The One. The job that'll go down in the history books as the Greatest Job.
Well, there's also the possibility of settling down, retiring, buying a Lurssen Mobius; Something like that.

But the JOB. That's the thing.

Rose discovered very early in life that she was far more agile than the average troll. Shunned by troll society for being untrollish, she preferred to practice gymnastics with the humans and elves, who tended to shun her for being a troll.
This resulted, over time, with Rose having a strong desire to just fit in SOMEWHERE. So she made herself a bit of a niche in the criminal underworld as a cat-burglar, specifically an art thief.

There's a lot more to her story, but most people don't want a life story in the middle of a dossier. See attached report in the GDrive. 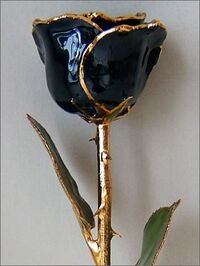 Rose's first heist was stealing a dozen black and gold metal roses, and this first theft is hugely important to her. She sold off eleven of the dozen, but keeps one with her, and leaves an ARO image of the last rose in the place of anything she steals. This started as a reminder, visited on being a thrill, played with being an addiction, but now has become so habitual that Rose herself no longer thinks about doing it, and would likely struggle to consider not leaving her calling card.

Furthermore, with her branding as "The Rose Thief", Rose has taken her moniker to heart, preferring to show a rose (or a symbol of a rose) on her person at most times.

Rose is a troll, but very slight for the metatype, only standing just over 2m tall, with more of an athletic build than a muscular one, which can make her stand out a bit when among other trolls.
She has shoulder length blonde hair that seems almost impossible to tame, seeming to adopt a new unintentional hairstyle every morning, which Rose gave up on a long time ago, so she just leaves it be. It's not that untidy. Just not able to be controlled (Or so she tells herself).

Her most striking feature, however, is her eyes; at a glance they could be normal, until you look properly; the irises are a flat, unpatterned green, and the whites of her eyes are metallic, with subtle shifting patterns in a slightly different texture across the surface. Since you'd been staring into her eyes to work out what the frag is up with them, you'd then notice that the pupils aren't circular. They have a jagged edge, which on even closer inspection are the edges of a rose motif.
Now stop staring into her eyes, weirdo. You're being creepy.

Rose hates looking untidy. As such, her go-to outfit is branded high-fashion, subtly modified for running. Currently, it's an electrochromic Berwick Dress and Argentum Coat ensemble, prepared for the latest gala or for cutting into a corp compound (Quite literally, she has a miniwelder built into the sleeve).
Even her 'casual' attire is tidy; Rose will tend to wear rather business-like shirts and skirts when not in her high-fashion getup. In fact, just about the only times that she won't wear something tidy is when she absolutely needs to wear something specific; like her chameleon suit, a uniform, or some full-body riot armour.

But - Rose does have an unusual caveat to this personal rule; She'll often wear a bulky helmet and custom face mask. Even if she's wearing the dress. That being said, she is one of those women who can bench-press most people who'd find fault with that.

Rose's Matrix Persona is a stock grey female metahumanoid, dressed in a black suit trimmed in red, with a matching fedora.