4NG3L is the name of a Decker who lurks in the shadows of the Matrix. She is tied both by blood and by birth to the Umezawa-gumi Yakuza Clan and mainly works as a shadowrunner and a cybersecurity spider for the syndicate. Her loyalty to the clan is absolute and, even if she has chivalrous tendencies which manifest in somewhat unusual displays of what appears to be honour, she can be just as absolutely ruthless in the pursuit of the job's completion and the clan's interests. In short, she a is a Yakuza Princess in every sense of the term, being the daughter of her clan's Oyabun, but is somewhat estranged from her father, sticking close to her older brother who, himself, is a ranking lieutenant of the syndicate.

Not necessarily in the following order, her goals are:

1. Obtain a hidden Matrix host and make it the only one in any area the Umezawa-gumi operates where underground cybercombat (including the occasional deathmatch) are held for profit.

2. Prove to her father that she is an asset to the Umezawa-gumi as a decker and/or as a Shadowrunner, despite being a woman.

Born and raised in Neo-Tokyo in the Minato Ward area to Kotono and Kenji Umezawa, Sasori Umezawa was brought up in the typical manner in Japanese culture, and above average education, and with no shortage of tech at her disposal. By the time she reached the age of 16, she was breaking into corporate Matrix mainframes. At age 24, however, she hacked into the Renraku's corporate mainframe with two other deckers in an effort to steal paydata. However, Corporate deckers caught Sasori and her accomplices, engaging them in cybercombat.

Link-locked and facing data-slaves who knew exactly what they were doing, Sasori fought back, fully intending to fry her enemies’ brains, succeeding in derezzing one of the opposing personas. However, the remaining corp-deckers made a point to make sure she and her accomplices didn’t stroke out from biofeedback when they finally outmaneuvered them. She managed to put up a fight for a bit longer than the white-hats had anticipated, but ultimately Sasori and the others were derezzed and found by the Neo-Tokyo Municipal Police Force, stunned from a very painful bout of dumpshock. Sasori woke up in jail with no bond and awaiting trial.

Renraku’s lawyers prosecuted with an aim for the maximum of ten years for Sasori and her accomplices, although the Umezawa clan’s defense attorneys managed to get them only two years. Renraku, however, happened to own and operate Chiba Prison at which Sasori was remanded and made sure her two years of incarceration were as uncomfortable and hellish as they legally could make them. Sasori had even been locked in solitary a few times for fighting other inmates when the corporate suits running the prison had set both other female inmates and even male inmates against her (once), just so that they could have an excuse to punish her; she survived intact mainly because she has aikido and karate training, which the prison’s administration found out after the first two times they tried to have her roughed up. They then used her martial arts training as an excuse to shackle her wrists and ankles anytime she left her cell.

Two years passed and she was released on parole, essentially keeping her ass clean and avoiding former haunts she used to hang out at on the Matrix. She checked in regularly with her P.O. and passed every drug test, having never been an addict in the first place while the Umezawa-gumi worked to get her off the hook as quickly as possible. The day after she was released from parole, her father and older brother began making arrangements to move her to Seattle in a part of the Japanese enclave controlled by the Umezawa-gumi. The moment she got to Seattle, Ryuichi made living arrangements in a comfortable condo, living amidst both gangsters and non-gangsters with a living stipend to take care of her as well as a forged SIN which she personalized herself via her hacking skills. It is the “Molly Millions” SIN that she has everything registered to, complete with a not-unusual background as a weapon shop manager.

She had also gotten retractable hand-razors and a cyberarm implanted (the latter to replace her right arm, which was badly damage in a street fight in Neo-Tokyo), new LED additions to the Yakuza tattoos she had gotten in Japan before her arrest, and got herself a new customized motorcycle made to look suspiciously like the lightcycles from Tron: Legacy. Whether Oyabun Kenji Umezawa liked it or not, Sasori was a Yakuza princess and the best he could do to keep her out of the gangster life was to, ironically, let her be independent and simply have the members of his Clan watch over her. Yakuza clans were notoriously patriarchal, so what few places women could find themselves in the crime syndicate’s management were always subordinate positions to male leadership, usually running legitimate front-businesses and managing organized prostitution rings, the former Kenji wanted for his daughter; however, the Oyabun knew that his daughter’s decking skills were an asset, whether he cared to entertain the fact or not.

Now, after being in Seattle for six months and only a few months away from her twenty-eighth birthday, Sasori had begun looking for a way to burn the SIN she was born with and the criminal record attached to it. She began making connections outside of Yakuza circles, particularly with SINless shadowrunner deckers on the local Matrix networks and in meatspace through people who visit the tech shop she frequents for decker gear and the body shop she takes her crotch-rocket, Murasaki-hime, to. New to the world of shadowrunning, but not ignorant of the concept, she has returned to dabbling in the seedy underbelly of the Matrix and meatspace, realizing that if she wanted to do things for the benefit of her family, her clan, and herself, she would need to return to the darkside of the Sixth World.

Biocompatibility (Cyberware): Sasori has always had a natural affinity for cyberware, which runs on her mother's side of the family.
Impenetrable Logic: Sasori has a quick mind and a smartass wit, deriving amusement from outsmarting other people and abusing her intelligence for nefarious ends.
Instinctive Hack: Having an affinity for Matrix work, hacking, cracking, and coding comes naturally to her and she has enough practice to have a system by which she operates as second nature.
Made (Wo)Man: Sasori is the daughter of a Yakuza oyabun, granting her some degree of pull with her clan through her connection to her older brother, Ryuichi, who is a ranking lieutenant in the Umezawa-gumi.
Overclocker: As an experienced decker, Sasori knows a few tricks by which she can capitalize on her gear's potential and is not afraid to push a deck or even a commlink to it's limits.
Trust Data, Not Lore: Sasori has learned the hard way to trust only what the data itself before her says and not to second guess it. While she can instinctively react to stimuli and it is an asset, especially in cybercombat, trusting her gut has caused more rookie mistakes (and the subsequent dumpshock) than not.

Creature of Comfort (Middle): Having been born and raised into appreciable wealth, she is uncomfortable in any living situation lesser than middle-class.
SINner (Criminal): Umezawa, Sasori; JIS. She has a criminal record which can be a liability and she has a mind to get that SIN burned, having determined that using a fake SIN deliberately kept squeaky-clean and sufficiently backed by the right data can more than replace the one she was born with.
Prejudiced (Common, Biased): Metahumans: Like most Japanese, Sasori holds a bias against non-Human metatypes. She finds racist humour funny, occasionally will use racial slurs if vexed sufficiently by a non-Human, and would be more likely to warm up to or otherwise trust a Human before any other race of Metahumanity.

Habits:
-Wearing “Gothic Kabuki-style” make-up in black and purple
-Wearing “Neo-Tokyo Street-Goth” and ‘funereal-elegant’ outfits
-Listening to both English and Japanese language synthwave, darkwave, and gothic rock music, mainly; noteworthy that she also has a guilty-pleasure for old classic rock, pop music, dance music, and metal, too.
-Playing Matrix VR games which involve practicing swordsmanship, gunplay, and actual cybercombat rather aggressively
-Is a notoriously clean person with an almost OCD penchant for neatness
-Tends to purchase or customize most of her belongings in her signature black-and-purple colour scheme with rosegold accents
-Speaks English with a Japanese accent and tends to swear in Japanese about as much as she does in English.

Temperament: Generally reasonable, but has very little patience for people she determines to have a significantly lower IQ than her own (which is a large swath of people, since she possesses above-average intelligence). Has a code of honour owing to her Yakuza family background with loyalty to family/the clan (in her mind, same thing) being paramount. However, this honourbound loyalty extends to ‘found-family’ as well, should someone manage to befriend her that closely. Has certain geeky tendencies and fandoms as well as stereotypical ‘girly habits’, but also will not hesitate to cut down or gun down anyone who threatens her or someone close to her.

Image theme (click me!): Neo-Tokyo (Dance With The Dead Remix) by Scandroid

The Umezawa Kamon is incorporated into her tabori-tattoos, specifically located over her left breast where her heart is; she personally claims it as one of the most painful sessions she had endured during her tabori. 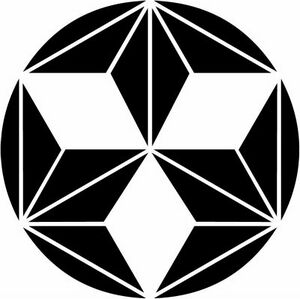 Identifying features:
-Datajack located behind the right ear at the base of the skull;
-Tabori-style Yakuza tattoos done in the traditional Irezumi method all over her body which stop only at the wrists, ankles, and neck (These tattoos have motifs of dragons, the sea, Western angels reimagined as Shinto kami, and subtle hints of technological themes such as hexagonal particles, implanted LEDS, and circuit board-style line patterns interspersed among the more traditional ukiyo-e art-style);
-Right arm is obviously a cybernetic prosthetic which has been painted and enameled to replace the tattoos lost when the natural arm was amputated. 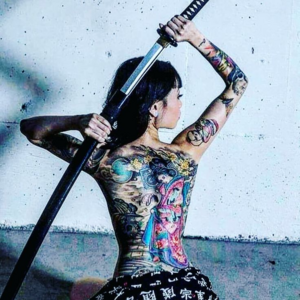 4NG3L tends to dress in modern Neo-Tokyo cybergoth-style streetwear mostly; special occasions may call for a formal kimono and her best one is a royal purple silken furisode hard-painted with feminine motifs associated with the Umezawa clan while the obi is black with violet and gold overlapping hexagons; 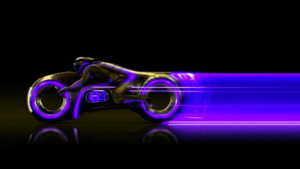 Murasaki-Hime as seen on the Matrix. The Motorcycle is the same in meatspace, sans the light-ribbon (without a holo-projector add-on, anyway)

On the Matrix (and to most people on the streets of meatspace), she goes by the moniker "4NG3L" (pronounced "Angel"). See the picture provided for how the persona appears on the Matrix. 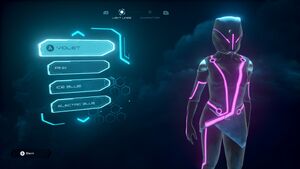 4NG3L's Matrix Persona. Similar look exists in meatspace, since her racing armour and helmet looks similar to this.