Sp4rks is the kind of Decker that hates to stay behind while the others do the dirty work, especially when fighting for a cause close to his heart. He apparently was involved in some way with the French runner scene before it's Nth revolution came to be. Outside of runs, he often will be found using recreational drugs, screwing around in VR at the same time, and enjoying life in this new country. Sometimes, he works pro bonno for the people that get screwed by mega corps, as he has some gripes with those, albeit he knows that at the end of the day the end justify the means.

Born in France, Syméon had the luck of being born in a wealthy family.

Studying Matrix technologies in the prestigious University of Fontainebleau, he got in contact with a new activist group that aligned with his beliefs of political reform : Section 89.

His beginings in the shadows were timid at first, but the ratification of the infamous Business Recognition Accords following the revealing of the Project Présage threw his life for a loop. Section 89 got up in arms, revendicating Matricial attacks all over Paris and it's most important political and economic centers. Soon, Syméon joined them. He made a significant difference, at his own relatively small scale, over time, he felt a power high that only grew.

When every other criminal organization were being rooted off of Paris by MARIANNE, Section 89 kept the pressure on for deep reforms. Even when nobles fell left and right, he and his team avenged the people, and took the fight to the megacorporations ! At least, that is what he believed. He really was not that good nor experienced, but over time he grew in ability and resolve.

One day, he learnt of a tragedy at the Montparnasse tower, the explosion of whole levels provoked a fire that killed many. His father worked there, and although their relations strained recently due to opposing beliefs he still shared a bond with him. When he learnt that another cell of Section 89 revendicated the attack, he lost all drive and promptly quit his cell, to the dismay of his comrades.

He quickly found out that his hacking attempts were pathetic outside of Section 89, but he is sure it was not his skill that diminished, no. Something fishy was going on. It only took a month before the local Matrix Authorities converged on his activities and had a case strong enough to incur significant prison sentences.

In a hurry, he transferred his heritage from his accounts to Nuyen-based credsticks, used a false ID to buy a Paris-Seattle tickets, and spent his last hour in France with his widowed mother before taking off, mere weeks before the Neo Revolution.

While not being systematic, Sp4rks like to capture data unrelated to runs and either free it on various datahavens or resell it for personnal profit. Most of the times he does the former, he will leave a virtual object in the form of osiris's eye to signify that all info eventually comes out. 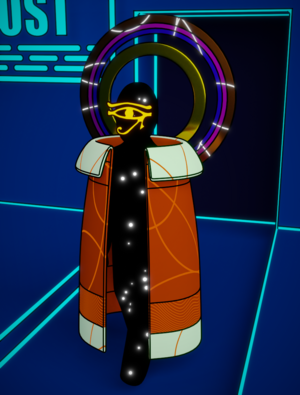 this guy's elegant trenchcoat clashes somewhat with his purple hair-do coming straight from the fifties. on closer inspection, you can see he carries a cyberdeck on his lower back.

It's trenchcoat is usefull to hide stuff in, for infiltration, but if he is primed and ready for action you will see a modified AK-97 strapped to his back for easy access. Add to that an Armored jacket and a bunch of ordinance hidden right under the coat itself in case things really goes this way. Finally he has a custom ballistic mask that has an entirely reflecting smooth surface, and project a yellow trid model of osiris's eye a centimeter in front of it in reference to it's Persona.

His matrix personna consists of a deep black humanoid through which stars and galaxies can be seen. Around the humanoid is a large coat obscuring most of the silhouette unless the avatar interacts with something. When the avatar interacts with the matrix, it often look like pure void rays or phenomenons, in addition to visual distortions such as those that can be seen around black holes and chromatic aberrations.

Off duty, he will often program in his lobby, sculpted after a medieval observatory with a huge telescope pointed towards the matrix's depths and piles of parchments in drawers. that or he might be chilling on Shadowhaven's host.

On a social media host used by many Qubecois activists gang, a moderator published this (in French): Shout out to this new face, one of the brave revolutionnaries of the Neo-Révolution of France called Syméon Bloom, who debated with one of our speakers about the way to a better future for our great country. Listen to him explaining to us how the real culprit of our troubles is using our own infighting to keep us distracted, while they continue to destroy what makes the people of Quebec who they are !

This is a trideo recording starting with a speaker addressing a crowd, stroking the flames of prejudice against anglophones in Québec by associating all anglophones with the effects that globalization had on their once closed off country. At some point, someone speaks up from the front row making a counter argument with a strong French accent, and is invited on the stage by the speaker.

We can see this man starting to debate the speaker on the merits of his point. Most notably the newcomer makes solid arguments about how the people of Québec should be united to have any chance at fighting against the Megacorporations manipulating them to their own benefit.

At some point, the newcomer presents himself as Syméon Bloom, one of the revolutionnaries who led France to it's Seventh republic. He argued how such a future is possible for Quebec too, but to do so it's population need to be strong and united against those who would rather see them weak and appart.

The crowd was utterly engaged, even clapping at the last arguments that Syméon made, at which point the speaker conceded an item to him, saying that he deserved to have it, as it is "the will of the people", and he was worthy to have it. Syméon congratulated his opponent, and commended him as being someone with principles, who he respect for conceding with dignity.

At the end Syméon walks out of the atrium, nearly lauded by the crowd and screams out to them passionately "Quebec is a strong nation, but only together can it's people fight back against those who want to see it down ! To the people of Québec, Unite !"