Ty is a full Chaos mage that plays like a Street Sam. His go to tactic is to channel a F8 Air Spirit and boost all his stats so he can shoot and fight next to all the other Street Sams. He uses and sustains illusion magic to help with this. Ty uses virtually no combat spells. He tends to be much more physically adept than most other mages.

Ty is an awakened shapeshifter from the Salish territory. His early memories are from growing up in the forests and interacting with the smaller communities, eventually becoming part of the metahuman world. Because of his curiosity, Shadowrunning appealed to him. He even met another shape shifting Fixer who helped him get his feet wet in the world.

Ty is a huge fan of Tacoma. The massive industry there fascinates him, though he finds the pollution annoying. His favorite place in Seattle is Fenris Nacht.

Ty does not shy away from using mental manipulation magic. He plays to win, and few things are off limits when bullets and fireballs fly.

Ty especially adheres to the metahuman ideal of honor. He cares little for the grand schemes in the metahuman world, preferring to just satisfy his curiosity. He would never willingly break his word, and nothing, not money, fame, status, or anything can buy him. Once he gives his word, he follows through. Ty doesn't seek the limelight, and as such he is absolutely willing to cast and sustain spells to make his team better.

Ty possesses an old, handwritten copy of Robin Hood, dating from the middle ages. He has never had it appraised, so he is not completely sure of the date or value.

Ty is doing grunt work for the SSC Rangers to make up for his involvement with the A Sound of Thunder job. He probably won't ever be totally off the hook, but the Rangers aren't actively hunting him anymore.

Ty is respected by all spirits he summons. However he has an air spirit that is particularly fond of him. He has nicknamed it Gwen, and it prefers to be referred to as a she. Ty has summoned this same spirit countless times. It was present during the encounter with the Slaver mage and was influential in Ty's decision to forego binding of any kind from here on out. Gwen's form takes a similar version of his own blue fox astral form.

Ty will often go out of his way to avoid violence with anyone, preferring not to get shot while still completing the job. But he purposely tries not to fight spirits based on principle alone. For every Mage like him that respects them and genuinely views them as allies, there are a dozen out there who do not.

Ty's Mentor - The Avatar of Reverie 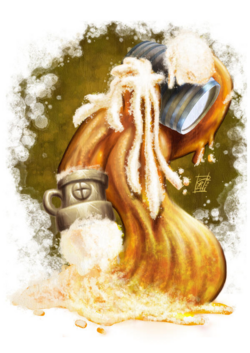 The Avatar of Reverie, or The Alcoholic, is a Mentor Spirit that is a distant cousin to the Seducer. It has the same benefits and drawbacks of that Mentor Spirit but with a few flavor differences. Where The Seducer seeks to seduce and manipulate in the traditional sense, Reverie is openly friendly. The Spirit is the embodiment of the phrase “Why have enemies when you can have friends?”. Plus every good Con needs some base to make it believable. Deception can be seen through and manipulations can be uncovered. But with plausible evidence, a good attitude, and some malicious compliance thrown in? You could probably get away with anything. Alcohol helps too, naturally.

Not commonly encountered, it was drawn to the artificially enhanced astral conditions in Sophocles. It has been present but has only recently shown itself to people. Since appearing it has taken a new disciple in the form of the Chaos Mage Ty Vallynn.

Magician - +2 dice for spells, preparations, and spell rituals of the Illusion category.

Adept - 1 free level of Improved Ability for a skill in the Acting or Influence skill group.

You must succeed in a Charisma + Willpower (3) Test to avoid pursuing a vice or indulgence (drugs, BTLs, sex, and so on) when it is made available.

Ty needs to improve his physical stats. Spirit boosts only go so far, and he needs to put in his half of the work.

Ty needs to expand his contacts. He is constantly searching for new friends.

Ty was born in the Salish lands. He was the only shapeshifter in a litter of red foxes. His distinct coloration is a direct result of his awakened powers and shapeshifter qualities.

He grew up like any other fox in the woods. He learned to control his abilities quickly, but didn't interact with a metahuman until he was about a year old. He started interacting with the small villages, and later moved on to the cities. His thirst for knowledge would lead him on to bigger and greater things.

When he was 3, he decided to become a part of the bigger world. He received a SIN a year later, and decided to move to Seattle and experience life on a much larger scale.

Ty is a member of the Sinsearach tribe.

Astral Chameleon - Ty was exposed to some of the best magical teachers that the Salish had to offer. Both because he was a natural, and because they wanted to observe and study him a little bit. Ty's aura fades and blends into the background better than most.

Chain Breaker - Forever an ally to spirits, Ty refuses to entertain the thought of binding them. He tolerates Ally conjuring since the associated mage forms such a strong, personal bond with the spirit.

Daredevil - Practical experience as a Runner is making Ty bolder. He is understanding his strengths and limitations more and more.

Mage - Ty is a Chaos mage. It makes learning about magic easier, and harder at the same time. He does take quite a bit of inspiration from Inari, and he models many of his symbols after her Shinto tradition. But he uses his own personal chaotic flair when he does things.

Mentor Spirit (The Avatar of Reverie) - Ty follows an Avatar Spirit made of beer he met on his second initiation run. This is a Seducer variant.

Quick Healer - The nature of who he is gives him an uncanny knack for healing back minor wounds.

Solid Rep: SSC Rangers - Ty maintains a good reputation with the Rangers. After the Thunderbird incident, he worked hard to improve is reputation and frequently does jobs with them as an on call Mage.

Spirit Affinity: Air - Ty has a natural affinity with spirits of the air. This relationship provides mutual respect between him and the spirits.

Tough as Nails(Physical I, Stun I) - The more you get hit the tougher you get.

Witness My Hate - Ty doesn't usually use magic for raw damage, but when compelled he makes a great showing of it.

Allergy: Silver, Severe - Shapeshifters aren’t normally allergic to silver, but due to unfortunate genetics, Ty is.

Code of Honor(Akichita Code) - Ty adopted a code used by many of those in his native home.

Distinctive Style - His ears, tail, and teeth cause him to physically stick out, and his astral form is distinct. In FBA, he could be easily picked out as a mage in blue and black armor fighting along side his companions. He also almost always uses air spirits in combat.

SINner: Salish-Shidhe Council - His original SIN. Ty is in good standing back in the SSC.

Uneducated - Ty grew up in the wild. Formal education is a foreign concept to him.

Tir Tairngire(Fake) R6 - Ty received it as part of a gear reward from his Fixer after a run. The name on the SIN is Lysanthir Valarian

Ty's Foci are sourced for him by his Fixer, Inari Ōkami. Most of them reflect her Shinto tradition, with a twist for him.

R5 Power Foci - An arrowhead on a necklace made out of aquamarine. This was traded for from a medicine man out in the Sioux Nation.

His metahuman form is that of a somewhat short, skinny male elf with bright blue eyes. His hair is black with natural blue accents. Ty usually dyes his hair to avoid suspicion.

In his metahuman form, Ty wears a dark blue and black armored jacket with a matching hooded cloak. He frequently also wears a scarf covering part of his face. The only reason he covers up so much is to hide his shapeshifter traits. He actually finds the multiple layers stifling. He almost always carries a holstered pistol.

His true form is a medium size dark blue fox.

In full gear he wears blue and black full body armor manufactured by Shiawase. It is clearly not military, but a trained eye could spot it as being similar to that used by the Corp's security. He also wears a long black cloak to cover up his tails. He carries an FN HAR, and a holstered pistol.

Ty uses a picture of a blue and black fox as his custom persona. He takes only a very casual interest in the Matrix, preferring to focus his pursuit of knowledge on magical topics. 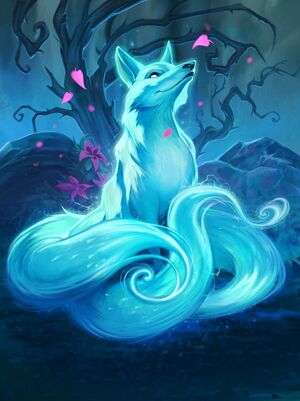