Protect the innocent, be heroic, and do heroic things. INSPIRE MORE HEROES.

CAPTAIN FREEFALL was just an ordinary teenage Minotaur, living with his mother in a run-down apartment in Touristville. He was watching his favourite action superhero trid when he heard a comotion in the alley below the apartment window. Looking out, he saw a person getting mugged by 3 gangers, and he Knew What He Had To Do.

He leapt from the window and landed in the classic superhero landing. His arms and legs would've been shattered if he hadn't been a troll. He stood up straight and declared "Never fear, I am here!" He then proceeded to be beaten into a bloody pulp, and learned the importance of actual fighting skills.

When he eventually regained consciousness, he decided to go and learn how to fight the only way he knew how: by watching trids. He managed to find some Sangre y Acero broadcasts. His focus in training helped speed his Awakening, along with the tragic death of his mother.

CAPTAIN FREEFALL is a HERO OF JUSTICE.

Day Job: Journalist: 20 Hours/Week, 4 hours per day Monday to Friday. Monday-Friday: 10AM-1PM: Canvasing various neighbourhoods, interviewing people about an editor-assigned piece, likely public interest fluff pieces like how people feel about increased speed bumps or something, and entirely up to the GM if it's in an area that's useful to any run he's on. 1PM-2PM: Compiling notes and writing the article.

Mentor Spirit: Guanyin. Because of course it is. Mentor's Mask is just his symbol glowing *more*.

Symbol: What kind of superhero doesn't have a symbol? A red C and F, entwined, on a blue background, in a Superman-shaped diamond on his chest. Also present on his cape. 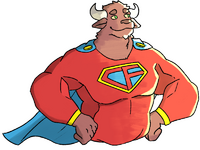 Same as his Heroing Persona, although he also has the generic persona on speed-select, so he can switch when he goes back to Mild Mannering

He's a reporter, so several?