An operative from a French Clandestine Operation team, who has been caught for illegal weapon possession. She feels betrayed by her country and has decided to run the Shadow and live a new life.

-Destroy the Starscreamers and take Down Pump King Jack. (At least War was pleased)

-Make further contact with her old team. "Now i am in again, for better or for worse. No matter the onslaught i'm an N-51 member."

-Bound the N-51 and Lt.Commander Yennefer Kerrigan. "A daring plan who worked, now only time will tell if it was a good idea."

-Survive Operation Hell's Gate if it's a success.

-Get rid of the curse that an Enochian Spirit put on her belly. "Violence gave you that strengh, awakened you...I can see it uppon your face where two bullet left their mark."

-Reinforced her potential and cure the burn of the Kamikaze "I got rid of the poison in my mind, now i'll stop poisoning myself...My potential lie in Magic, not stim."

-Being recognized as a true artist

-"My life hang in the balance and i'm torn between duty and promises..."

-Pay a visit to her parents tomb someday when she could afford this kind of trip back to France "Can't help but i'm not gonna see them thought..."

Shy was born in the middle class, from a japanese mother who fight for the Imperial Marines and a french father veteran of the "Légion Étrangère". Her own name "De La Perière" is supposed to be link to an old family of french mercenary that fight for the german empire till the first world war (the last one was an U-Boat commander, supposedly). According to this Shy learned soon the principle of discipline and respect, her parents pushed her to the way of the military but she thought about an art graduation. After an heavy negotiation Shy finally got the right to graduate, her inspired state of mind make her hop a year of study and she quickly got bored. Some weeks before her 17th birthday feeling like a rebel she decide to run away without telling her parents, finding a way to lie about her age she did sign up for the military.

Pretty gifted, Shy did manage to join a paratroopers regiment and earned her wings soon in October 2070. While on permission she decided to pay a visit to her parents who didn't really were that angry in the end. Shy was baptised during the 2070 December fighting on the SOX, a traumatic first experience that led to her Awakening who help her survive this first combat experience. Her platoon suffered heavy casualties (namely because the evac chopper got downed by a missile.) so she was affected to a new unit. Since she was awakened now, she was sent into the Special Force. First going throught the "Commando de Marine" training program, Shy specialised in marksmanship and infiltration tactics. After two year of rough training and soon before her 20th birthday she join her active unit the Task Force November 51 or N-51.

Her years as a Black Ops/Clandestine Operation were simple to her, some jobs were to get done so France could get better, so she did. But the whole thing change in 2076, during the political turmoil the N-51 was deployed in Boston during the lockdown to help searching Angélique Rouge a national heroine disappeared in the city. The N-51 got hit hard during the whole operation in support of the "Légion Étrangère" and runners team. After the event of Boston and the succesful rescue of Angélique Rouge, the N-51 got sent to put on a base in the Nevedean Desert.

The N-51 was deployed and quickly reach Seattle to track someone supposedly linked to Angélique Rouge run of bad luck in Boston. Homever Shy got arrested while transporting gear for the operation to come. She got arrested and prosecuted for smuggling and got sentenced to five years of prison. Du to the political turmoil following the Treason of Vincennes Shy couldn't count on help from the country and the N-51 couldn't act as well.

Shy followed the Neo-Revolution event from her prison cell and also learned the death of her parents in the car crash. Bad faith make her tell that it is because of this turmoil that her parents died. Feeling abandoned and disconnected of what her country had become, Shy decided to use the money from her Inheritance and her payroll to buy some gear and to join the Shadow. When she got her gear ready she use old N-51 intel to get in contact Ltn Commander Yennefer Kerrigan and ask her help to get her first job.

So far she didn't really act accordingly to her training. Still feeling the pure rage in her guts she make many mistake and did follow road that she wouldn't follow. The best exemple being the Starscreamers. But she did also get the attention of War as a mentor spirit and now got a chance to make contact with her old team. Shy feel like she is at a turning point of her life is it true ? Time will tell.

Update from the 30/09/2022 : In a year, Shy proved to herself that she was worthy of the attention of War. She did pick a fight alone against Pump King Jack and got cursed for that. She joined back her old unit who is now rogue and in a fighting against SK operation in Seattle to steel a Blood Hawk. She managed to get over the curse and had to meet a dragon for that, her drug problem is at an all time high, and she look like she is about to die in the following months.

Many people would back down, but Shy is a Chosen of Bishamonten, she can't do that...Not yet. For now she has one objective, the Blood Hawk and the success of the operation about stealing it. If she has to die in the process, then it's because she was too weak...After all War and Violence gave her strengh.

Undying Girl : (Toughness , Will to Live 3, Tought as Nail Physical 2 Stun 1 & Quick Healer) : Shy did have a lot of close call with death, eveytime she managed to get out of it alive...Is she lucky ? Or does she just have some kind of uncanny toughness. Now in addition to this she seems to recover faster than ever.

Silver Spoon Childhood (Born Rich, Bilingual, Inspired Artisan) : Until the time she join the Military Shy grew up in a pretty wealthy family and did fail a graduation in art because she wasn’t willing to put too much work into it despite her great capability in the domain.

Bishamonten’s Daughter (Mentor Spirit War, Chosen Follower) : Bishamonten the War Kami take great interest in Shy’s accomplishment so far, even tho he push her into doing some reckless thing sometimes.

Drug Tolerant : Shy do a lot of combat drugs so much that her body is not kind of accustomed to the use of those...Nothing to worry about.

Natural Leader : Being still alive after so much onslaught...Kind of gave a reputation to Shy. As long as she breath, everything should be fine right ?

Perceptive 2 : After all that time running the Shadow, fighting for the military and the prison life, very few things can escape Shy's gaze.

Clandestine Operation Training (Poisoner, Catlike, Sharpshooter, Battle Hardened I, Disgraced) : Everyone knows Shy for two thing, first her Kami addiction, Second she is a veteran (and still members) of a Clandestine Operation Task force and as such she received a lot of training according to this domain. In addition she is know for her lack of morale and her indiscriminate use of really nasty mean to kill people. (Mainly the use of Combat Gas for now)

Gift of the Shadow (Insomnia + Phobia Mild to Shadow Spirit) : Her encounter with Jack at Yellowstone was really, really bad and since then her mind didn’t really recovered.

Clandestine Operation habits (Faceless, Impassive) : Shy is not really good at social stuff. She wears a mask most of the time and don’t really show any emotion whatsoever.

The Ashes of the Burn (Dry Addict Burnout Kami) : Shy was known for her use of combat stimulant she did go so far as going on a Severe Addiction to K-10, she manage to survive without going berserk. After a long fight and help by Psychip from the N-51 head physician, she manage to get off. Now she understood that her power are far more greater than the drugs she could have use before.

Dependents (Inconvenience) : Shy did adopt a Fenrir Wolf, sadly it take money to keep it.

Astral Beacon : Shy's aura is noticeable easily, since she is Chosen of War and also that she had some issue with Shadow Spirit you can't really miss her on the astral.

Poor Self Control (Vindictive) : Shy is an ever angry women since the death of her parent and she will be sure to let some people know about this anger in her guts.

Wanted (25 000 Nuyens) : Shy did not care about her Criminal SIN and now Knight-Errant is on the agressive side of reintegration.

I am living on Borrowed Time... (Thematical stuff) : Shy did overused combat stim for years, she had close call with death three time, heavy medication and huge amount of drug in her blood kind of wreck her beyond salvation. 03/11/2022 update : Pump King Jack gave her a pie and now her body is doing better...May help her for a bit.

Record on File (Saedder-Krupp) : The Megacorps have files on a lot of N-51 operative due to their action against them. Shy is especially known and could be a target of future operation.

Record on File (Ares) : An open wound received on a Black Site led Ares to get her biometrics and find data about her old Criminal SIN. Oops ?

Task Force November-51 : Sergeant of Squad Charlie that she has to oversee.

Yakuza : Not her enemy per-se but she doesn't like criminals like them and will avoid any contact with them that don't imply killing or hitting their assets.

Shy wear proudly the insignia of the N-51 (see the Group Contact page) on a Red Beret that she always had on herself.

Hiromi de la Perière : Real SIN , Flagged as Criminal by KE (maybe still of use in France tho.)

Shy has nothing to do with her old self from when she joined the Shadow. She still look "young" but kind in that vampiric way, she became quite pale, unhealthy pale.

She is pretty average height and a pretty sturdy build all in flexibility rather than pure strength. Her eyes show deep bloodshot, like the one of the big addict on Kamikaze, only some people know that's the side effect of K-10. Shy is also subject to tremors when she is not doing anything which can lead to pretty awkward situation.

She was pretty handsome before, but now she is a shadow of her former self, sporting a lot of scar the most notable are some burn from her time in Yellowstone and the one from the bullet that nearly killed her in Russia.

Shy is more serious now, she wear regular cloth, usually a military pants and some casual clothing for the top.

Most of the time thought she can be seen walking around with her FBA.

When she has to go on a party or to attend the higher society she usually embrace the Goth Style. 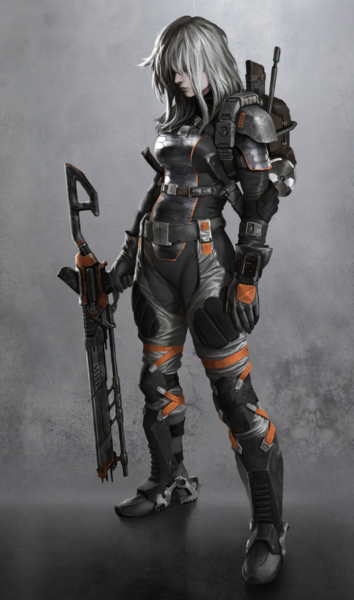 Helmet model of the FBA

Change sometimes but is usually some French or Japanese historic figure

Some olds little mention when she got prosecuted.